A proud house captain and stickler for the rules 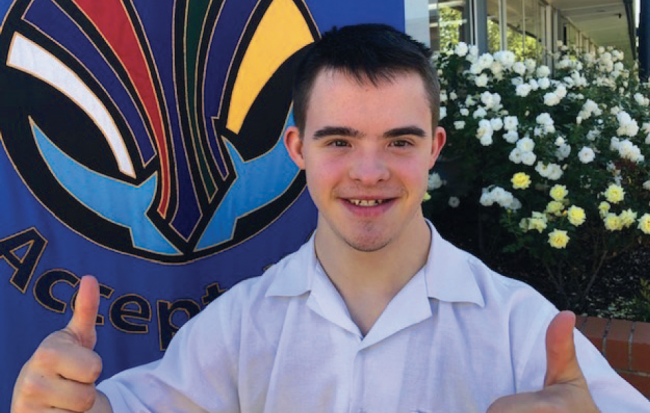 ALL schools have extra special students.

Tim Garrity is one of them.

And his Year 12 peers at St Francis Xavier College know it.

They recently elected Tim a house captain of Dullugal House, making him part of the school’s leadership team.

Tim, 18, has Down Syndrome and fellow house captain Amy Briggs described him as “someone who breaks down barriers”.

“Tim sees everyone as his friend which is a great way to live your life,” Amy said.  “Tim knows everyone and everyone knows Tim.”

It is uplifting to spend time with Tim.  He is happy as he talks about his loves of music, dancing and school.

He shares his love of music with Year 12 coordinator Anthony Telford who has known him for six years.  They are great mates.

“Tim nominated to be house captain and gave a speech to the Year 12 students,” Mr Telford said.

“Tim’s a real stickler for the rules so he spoke about encouraging students to follow the rules and participate.  Tim’s great because no one can say no to him.” “Tim took over as year coordinator,” Mr Telford explained.  “He had his own office and invited people in for a chat.  He also had a notepad.  I’m not sure what it was for but he had one.”

One of Tim’s favorite pastimes is karaoke in Mr Telford’s office.

“The Year 11 and 12 students finish at midday on Fridays so last year Tim had to wait for his younger brother Josh,” Mr Telford said.

“We did karaoke in my office.  We sang Movin’ Out by Billy Joel.  And My Song.  Tim’s a slightly better singer than I am.”

School has been a positive experience for Tim and SFX a part of the Garrity family.  Tim’s older sister Ashlyn finished in 2018 and Josh is in Year 11.

Tim is also in the workforce.  Last year he started an IT position in the public service where he clocks on each Wednesday morning.  He will increase his work hours this year and into 2021.

A beaming Tim said his friends made him happy.

“And singing and dancing and maths and I love Telford,” he added.  “Plus I love food, particularly salami wraps, chocolate and coke.”