A Queen’s Birthday gong for telling the truth THE man who has championed the cause of people abused in the Catholic Church says his Queen’s Birthday award is a personal honour that also values the people he strived to represent.

Francis Sullivan, 63, said it was wonderful to be appointed an Officer (AO) of the Order of Australia, adding the gong “implies their value, the people I have worked for.”

“We needed to step up and tell the truth and reveal the really dark side of the culture of the church, and that wasn’t easy,” the former chief of the Church’s Truth Justice and Healing Council said.

“For many people it still isn’t easy.”

A prominent church figure with a background in health and aged care, Francis described the church’s response to the Royal Commission’s recommendations as “patchy”.

In other observations he said:

• The church is still “very brittle” when it comes to public scrutiny and criticism,

• The role of women has improved markedly but not at the level of participating in decision-making and,

• The church needs to move beyond structures and be open to how it can best represent Catholics in a way that is contemporary and relevant.

“I worry that we don’t put relevancy high enough up on the needs list,” Francis said.

“We sometimes put compliance and conventionalism in front of relevancy and imagination and creativity which may be more reflective of the broader community of baptised Catholics and how they are being asked to do life.”

The confronting experience of sitting through shocking Commission hearings changed the father-of-three’s own faith journey.

“It really called me to take personal responsibility for my own faith life, not to outsource it to conventional religious practice,” he said.

“To find my own ways of participating and nourishing my faith.” A chuffed Francis Sullivan AO at home with wife Susan.

While some parts of the church were responding with “innovation and enthusiasm” to the Royal Commission’s findings, in other areas there was a lack of resolve.

“There has been an openness by bishops and religious leaders to be more accountable for actions although I feel there is a tendency for that openness to slip into defensiveness when they are confronted by public scrutiny,” Francis explained.

“The church is still very brittle when it comes to public scrutiny and criticism with an element that falls back too easily to tribal mentalities that ‘everybody is against the church’.”

Reflecting on the role of women in the church, Francis said giving women senior roles was not enough.

“One of the real challenges today in any internal church conversation is let’s not define our conversations in the static framework of structures.

“Let’s start by asking how we want to be and do church not how we will merely administer the church.

Francis currently works three days a week as executive chair of Mater Group Ltd, leading the One Mater project to merge three Mater health systems in Queensland under a single board of governance.

Wife Susan has for many years led a Ministry Leadership Program at Catholic Health Australia that is being taken on by Australian Catholic University.

The couple’s three children are dotted around the world.

Clare works for mental health organisation Beyond Blue in Melbourne, Camille is doing a two-year stint at a law firm in London and Tim lives in Brooklyn and works at a law firm in Manhattan.

The Sullivan clan catch up twice a week for a WhatsApp video link.  To coordinate time zones, the dial-in times for Francis and Susan are Tuesday nights and Saturday morning.

“The last time we all got together was Easter last year,” Francis said.

“The next time is anybody’s guess unfortunately.” 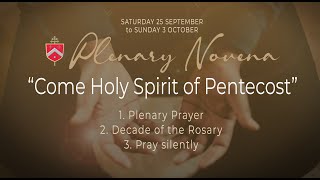