Advent: an opportunity to look at our relationship with time 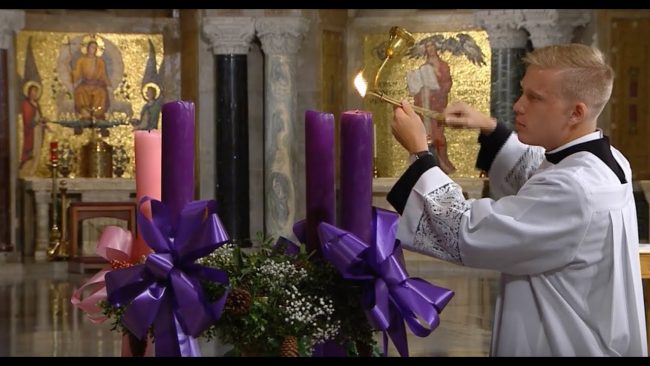 One of the nicest things about the last 50 years has been the rediscovery of Advent, especially Advent as a mini-Lent.

If you struggle with the six weeks of Lent, then using Advent the year before can be like a soft opening. You and your family can find out just how unbearable you are when you’re not smoking, drinking, eating chocolate, or binge-watching.

But what about Advent as a chance to slow down?

This cuts directly across everything that December normally brings us: shopping, rushing, overscheduling, and those work parties with the disappointing little meatballs.

The first hint that something was wrong was when a wise friend reminded me, ‘the cleaner the house, the angrier the woman.’

My Advent vice is shame-cleaning. Shame-cleaning should really have a German name (Schamreinigung is the best that Google Translate can provide.) Shame-cleaning happens when you are not very house proud – and then invite people to your house.

But I found that what happened each year was that as I cleaned up one part of the house, other parts began to look a lot messier. With each passing year, I was going further and further into the backs of cupboards, mystery plastic storage boxes, and – horror – the garage.

This sounds like it’s going to become a spiritual analogy, and it is, but not in the way you imagine.

I was using shame-cleaning as a way of avoiding God during Advent. Time that I could have spent in spiritual reading, prayer, or Adoration, I was spending with rubber gloves on, cleaning the tops of the kitchen cupboards. The first hint that something was wrong was when a wise friend reminded me, ‘The cleaner the house, the angrier the woman.’

The second hint was that my good friend and theologian Matthew Tan came to Perth in 2019 and gave an excellent talk to the Dawson Society on sloth.

Sloth is the sin of the wrong or poor use of time. This includes frantic overscheduling, or allowing one job to drift into another, or multitasking so that nothing gets finished, but you feel ever so busy and productive.

The idea that we need to order our time – that there is a right time for doing some tasks, and a time when you have to put them down – is deeply Biblical.

It’s also rather shocking news to a workaholic multi-tasker who was born ready, and who goes everywhere with a list. So for me, Advent is going to be four weeks of stopping, daily. I need a daily schedule to find time when I will do nothing except be with God.

Clean cupboard tops cannot take priority over spending more time with the God who made the cupboards, as well as their owner.

Advent is a season entirely about time and its right ordering. The Incarnation is the historical point at which eternity meets time. The Mass is the daily reconnection of eternity with time.

The Christmas song is right: it’s the most wonderful time of the year.

Christmas is a central event in the religious and secular calendars of the West. For people of Christian faith, Christmas marks the point where the ... Read More

NEWER POSTYoungest children’s use of screens keeps rising; is there any limit?
OLDER POSTMission