Analysis: Pope Francis and the Germans 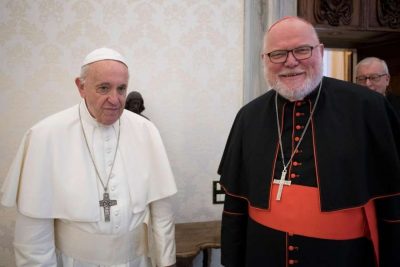 The long-awaited McCarrick report is due “early” this year; so too is an expected apostolic exhortation following the Synod on the Amazon. Also on the horizon is a long-trailed but still to be delivered new constitution reforming the Roman curia.

But bubbling under the surface is one question which could ultimately define the whole of Francis’s papacy: what will he do about the Germans?

The German bishops’ conference has been on a collision course with Rome ever since they announced a two-year “binding synodal process” to address – and reform – universal Church teaching and discipline on issues ranging from clerical celibacy to women’s ordination to same-sex unions.

As they publicly staked out their intentions last year, in partnership with the Central Committee of German Catholics (who hold opposite views to the Church on all of these issues), every effort was made to make them change course.

Pope Francis himself wrote a letter to the whole Church in Germany, warning against a false synodality, one rooted in making the Church conform to modern secular morals and thought, which he called “a new Pelagianism” which seeks “to tidy up and tune the life of the Church, adapting it to the present logic.”

The result, Francis said, would be a “well organized and even ‘modernized’ ecclesiastical body, but without soul and evangelical novelty.”

When Francis’s pastoral concerns went unheeded, different curial heads gave explicit warnings, first in private, then in public: the German plans were a challenge to the universality of Catholic teaching and discipline and not valid.

Undeterred, the German bishops began the first session of their synodal process in Frankfurt yesterday.

It is unclear what Pope Francis will do in response, but what is clear is that the German agenda touches every major issue on the papal desk this year.

The issue of clerical celibacy has been a contested topic in Rome, before and after the Amazon synod. Cardinals Marc Ouellet and Beniamino Stella made public interventions defending the discipline in October. More recently, Cardinal Sarah published a book with contributions from Benedict XVI mounting a resolute defense of the practice.

While official papal spokesmen have underscored Francis’s personal commitment to celibacy, the settled wisdom is that a narrow carve-out for the Amazon might meet with papal approval. But the pope’s freedom to treat the Amazonian question discretely may prove limited.

An end to mandatory celibacy is widely touted as one of the expected outputs of the German synodal process, and the bishops there have been explicit that they would seize on any exception made for the Amazon.

Bishop Franz-Josef Bode, vice-chairman of the German bishops’ conference, said in a 2018 interview that if the ordination of married men is authorized for the Amazon, the Germans will insist on the same authorization.

“This is obvious,” Bode said at the time, insisting that the “pastoral emergency” in his diocese of Osnabrück and in other German dioceses is “different but also very severe.”

Bishop Franz-Josef Overbeck of Essen, who is also president of Adveniat, the Church in Germany’s aid organization for Latin America, has called the Amazonian synod “a point of no return” for the Church and that “nothing will be the same as it was.”

At the heart of the dispute over clerical celibacy, and the other changes being mooted in the German synodal process, is a mounting power struggle between Rome and the Church in Germany.

While Pope Francis and his curia have been clear that the Vatican alone can treat issues of universal Church teaching and discipline, the Germans have been equally clear that they see a very different future for the Church.

On Jan. 27, the secretary of the German bishops’ conference gave a pointed interview insisting that it is “unacceptable” that Rome continue to have full discretion over universal teaching and discipline. Instead, Fr. Father Hans Langendörfer, SJ, called for other regions to follow the German’s example and effectively force through a new federal model on the Church.

While some are expecting matters to eventually come to a head with the pope having to either explicitly give them their way or force them back into line, others are pointing to another item high on the pope’s agenda as the likely dénouement of the dispute.

The pope’s council of cardinal advisors is still reviewing feedback on last year’s draft of Evangelium praedicate, the new apostolic constitution on the structure and functioning of the Roman curia. Buried within the draft text, in the section laying out the authority of the Congregation for the Doctrine of the Faith, is a provision which bears directly on the German proposal for a federal Church.

The draft text refers to the “primary responsibility” of individual bishops and national bishops’ conferences for the Church in different countries and regions. In what would be a significant innovation, the draft constitution specifically refers to the “genuine doctrinal authority” of national bishops’ conferences, and says the CDF “will apply the principle of subsidiarity” on any measures related to “protecting the faith.”

Multiple sources familiar with the drafting process have told CNA that this provision, previously dubbed a “blueprint for federalism,” was heavily informed by the wishes of Cardinal Reinhard Marx of Munich, head of the German bishops’ conference, and a key member of the pope’s council of cardinal advisors. The same sources, across several curial departments, told CNA that it was the focus of sustained criticism in feedback offered by bishops around the world last summer.

Officials in the Congregation for the Doctrine of the Faith and the Congregation for Bishops have told CNA that, if the provision remains in the final text of the constitution, it would essentially validate the German synodal process, whatever the curia’s stated objections to it.

“This is the reason for their confidence, and for the boldness,” one senior official told CNA this week. “It is a waiting game – they say to us ‘wait and see [our] results before you judge the process,’ but by then they can say they have this authority and demand subsidiarity.”

“Never mind which dicastery comes first in the line [in Roman precedence], these two sentences can remake the whole Church.”

Pope Francis has made open and sometimes contentious discussion a hallmark of his papacy and he is widely seen as preferring to hear all sides of an issue before making up his mind. But with their “binding synodal path” now formally underway, the pope may increasingly perceive the German bishops as trying to box him into giving them their way. While he may not relish an open confrontation, they may have left him no other option.

Whether he turns his attention to the furthest corner of the Amazon, or to reforming his own curia in Rome, Francis may find that all roads lead through Berlin in 2020.