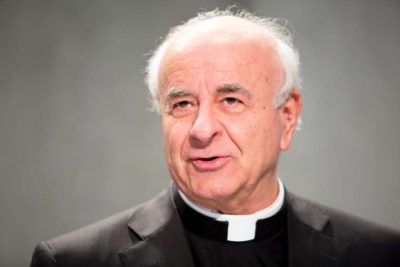 Vatican City, Dec 11, 2019 / 04:08 pm (CNA) – Archbishop Vincenzo Paglia, president of the Pontifical Academy for Life, said Tuesday that he would be willing to hold the hand of someone dying from assisted suicide, and that he does not see that as lending implicit support for the practice.

Paglia spoke at a Dec. 10 press conference preceding a two-day symposium on palliative care, being sponsored by the Pontifical Academy for Life and the WISH initiative, part of the Qatar Foundation.

Answering a question about assisted suicide and whether a Catholic or a Catholic priest can be present at someone’s death by assisted suicide, Paglia told a small group of journalists that he would be willing to do so, because “the Lord never abandons anyone.”

“In this sense, to accompany, to hold the hand of someone who is dying, is, I think a great duty every believer should promote,” he said, adding that believers should also provide a contrast to the culture of assisted suicide.

“I believe from our perspective, no one can be abandoned, even if we are against assisted suicide because we do not want to do death’s dirty work,” he said.

Asked his thoughts on directives such as these, Paglia responded, “Let go of the rules. I believe that no one should be abandoned.”

“I would like to remove the ideology from this situation,” he said.

Paglia added that it is a “cruel society” which tries to justify assisted suicide, or which abandons those not deemed “good” enough.

Suicide is a “great defeat” for society and can never be transformed it into “a wise choice,” he said.

In addition to discussions on assisted suicide, the Dec. 11-12 Vatican conference will include presentations by representatives of Christianity, Islam, and Judaism on the topic of medical ethics, the mental health of the elderly, and interreligious cooperation to incorporate spirituality into palliative care.