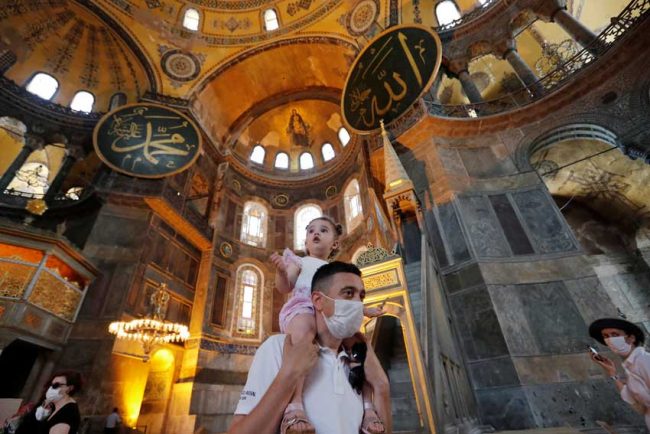 A man holds a child as they visit Hagia Sophia in Istanbul on 30 June, 2020. PHOTO: CNS/Murad Sezer, Reuters

The president of the Australian Catholic Bishops Conference and the head of the Greek Orthodox Archdiocese of Australia say Hagia Sophia’s revised status as a mosque risks sowing division in a world already struggling to find common ground.

In a statement signed by Archbishop Mark Coleridge and Archbishop Makarios released on 24 July, the two leaders “join our voices to the many around the world who have expressed deep regret at the recent decision in Turkey to change the status of Hagia Sophia/Aya Sofya”.

Hagia Sophia, which was a Christian cathedral for more than 900 years before becoming a mosque in the 15th century, became a secular museum in 1935. After a decision earlier this month, it has again become a mosque with Friday prayers set to resume on 24 July.

The archbishops said the grand building has, for the past 85 years, been “a monument of world cultural heritage and a symbol of inclusivity”.

“Our fear is that this could aggravate tension between Christians and Muslims at a time when we need to pursue the path of dialogue and seek common ground,” the statement says. “The path of nationalist ideology and the political decisions it prompts can lead only to division, which is never the fruit of the holy wisdom all religions seek.”

Earlier this month Pope Francis expressed his sadness at the decision by a Turkish court to revert the iconic museum into a mosque.

While commemorating the International Day of the Sea during his Sunday Angelus address on 12 July, Pope Francis told pilgrims in St Peter’s Square that “the sea carries me a little farther away in my thoughts: to Istanbul”.

“I think of Hagia Sophia, and I am very saddened,” he said.

Other bishops around the world have since echoed his statement with the US bishops conference urging Turkish President Recep Tayyip Erdogan “to reverse this unnecessary and painful decision and restore Hagia Sophia as a place of prayer and reflection for all peoples”.

Turkey’s presidential spokesman Ibrahim Kalın said the Christian mosaics would continue to be preserved although covered with a curtain during prayer times. “The main point here is that there is no damage to these mosaics, depictions, the historical texture and architecture of the building,” he told media last week.

The Australian archbishops prayed for the people of Turkey, including the Christians “who have been especially grieved by this decision”.

“We pray too that in time the decision will be reversed, so that Hagia Sophia/Aya Sofya can again be common ground for all people and an emblem of peace,” they wrote.