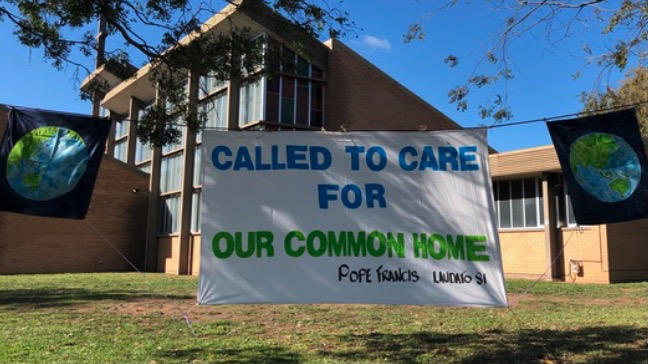 Several Archdiocesan parishes energetically participated in the Laudato Si week, which concluded on Sunday with a unique worldwide invitation from the Vatican’s peace and justice office to all Catholic communities.

A project of the Vatican department for Integral Human Development, headed by Cardinal Peter Turkson of Ghana, the Laudato S’i Anniversary Year, will offer a clear emphasis on both “ecological conversion and action,” according to a communique from the department.

The initiative was revealed May 16 by the Dicastery for Promoting Integral Human Development as part of a “special anniversary year” planned for Pope Francis’ 2015 social encyclical, “Laudato Si’, on Care for Our Common Home.”

On a local level, parish priest and Vicar for Education, Msgr John Woods, along with parishioner Vikki McDonough, got in early with placing “#Signs of Faith” banners outside the churches in Curtin and Garran. McDonough expressed concern about the recent summer extremes, which she believes raises the need for a more powerful message on the environmental legacy.

Coastal and rural parishes were well represented as were several Canberra parishioners at mid-week ‘webinars’ on Our Common Home. Parish priests and other religious leaders joined their parishioners online to discuss the ongoing drought, the recent bush fires, and the worldwide COVID-19 pandemic. Co-Founder of The Global Catholic Climate Movement, Remond outlined the Laudato Si imperatives around integral ecology. The group reflected on ways to dialogue and to transform human systems in the face of recent calamities.

Links to video recordings of the webinar discussions are available through South Belconnen or at  https://us02web.zoom.us/rec/share/-PEkLY3MyjhLSavIzGjiapYjQomieaa81HMfrPQOmB0dSi-PGEB5F9Md6NvL9PW1 .

A new look on Ash Wednesday

Fr Norvin distributing ashes at St Christopher's Cathedral With the menace of COVID in mind, the Catholic Church went back to ancient traditions to celebrate ... Read More