An idea that could help improve the lives of hundreds of people this winter came from a conversation between two sisters.

Jill Boggan was speaking to her sibling in the early summer about headlines predicting that millions more people in the U.K. would struggle to pay their energy bills when prices were hiked again.

One study published a couple of months ago suggested that more than three-quarters of U.K. households would suffer “fuel poverty” — defined by fuel costs representing more than 10% of household income — by January 2023.

The U.K. is particularly affected by soaring natural gas prices as a higher proportion of homes are heated with natural gas boilers than in other European countries and around 40% of electricity is produced in natural gas-fired power stations.

Working as the Catholic Archdiocese of Liverpool’s director of finance, Boggan is responsible for managing the 37 licensed parish centres across the archdiocese. The centres have premises licenses, meaning they can serve alcohol for events such as weddings, birthdays, and funerals, and provide entertainment including films, dance, and music. They also host parish and local community activities where the bar is closed.

Boggan spoke with two colleagues about whether the venues could be made available to all comers when winter began to bite. They discussed how the centres could provide not only warmth, but also tea, coffee, cookies, free Wi-Fi, and television.

The proposal was presented to the archdiocese’s finance committee, board of trustees (chaired by Liverpool Archbishop Malcolm McMahon), and pastors overseeing parish centres.

“The support for this has been great across the archdiocese,” Boggan said. “There’s nobody who thinks it’s a bad idea.”

Fr. Stephen Pritchard, the pastor of Our Lady of the Assumption in Gateacre, said he was happy that his parish was taking part in the initiative.

“I’m delighted that we’re doing it. It’s a great initiative. I’m glad we’re being so responsive so quickly, and sort of ahead of the curve before the winter really does get worse.”

With “Warm and Cosy” up and running across the archdiocese — which encompasses a total of around 1.8 million people including half a million Catholics — Boggan is thinking about ways to develop it further.

“One of the things that we’re doing at the moment is putting a rack in each parish centre, where if people wanted to donate a good quality winter coat that they no longer use, hats, gloves, scarves, it will be in that area,” she said.

Fr. Pritchard, whose parish includes some of England’s areas of highest deprivation, said he hoped that people visiting the two clubs connected to Our Lady of the Assumption would find “not just a warm place, but a sense of belonging, a sense of welcome, a sense of being together with other people, just watching TV, having a drink together.” 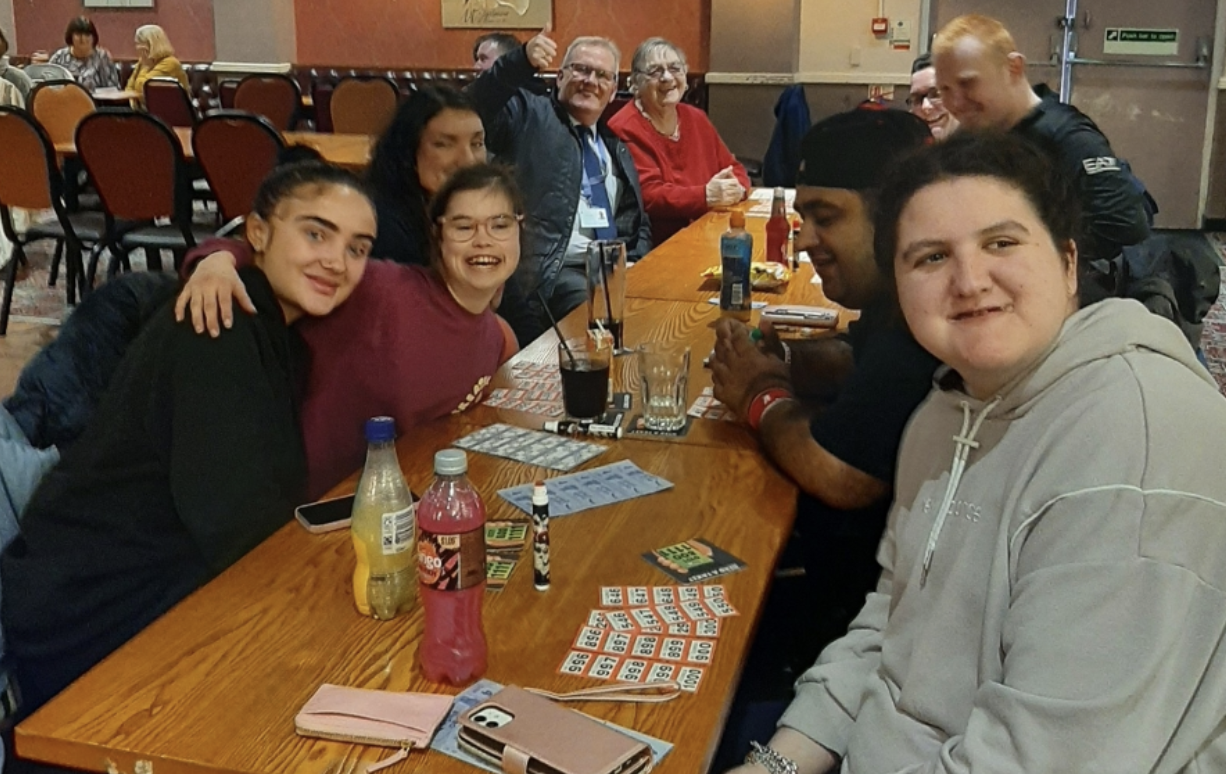 The parish centre of Liverpool’s Our Lady of Mount Carmel church, one of the ‘Warm and Cozy’ scheme’s venues. Photo courtesy of the Archdiocese of Liverpool.

“For me, it’s not simply the availability of food and drink, a place of warmth,” he reflected. “I think there’s an epidemic of loneliness. That’s a key thing in this community. People feel displaced and maybe not knowing where they quite belong.”

“More than just people coming together to get warm, it’s actually creating a sense of community, a sense of belonging, and people care for each other. That’s why ‘Warm and Cozy’ for me is important.”

Boggan said she believed the initiative was a reflection of her Catholic faith.

“We can’t solve everything for everybody, but where we can do something in a practical way to help other people, it is hopefully fulfilling that, and it is an expression of us caring for others, especially during these very difficult times,” she said.

“I’m a finance professional. Whilst everything that we’re doing on an administrative level is very necessary for the functioning of the organization, to be able to contribute in that very tangible way as well is fantastic. I would say personally, it’s the most rewarding aspect of the job.”

She added: “I can’t speak for everybody else, but one thing I can say is that all the members of staff within the diocesan offices here have said how proud they are to work for an organization that’s helping people in these times. Everybody’s behind it really with that feeling of common purpose, and it is an expression of our faith, I think.”

Pope establishes World Day for Grandparents and the Elderly

Pope Francis has decided to institute a Church-wide celebration of a World Day for Grandparents and the Elderly. Starting this year, it will be held ... Read More