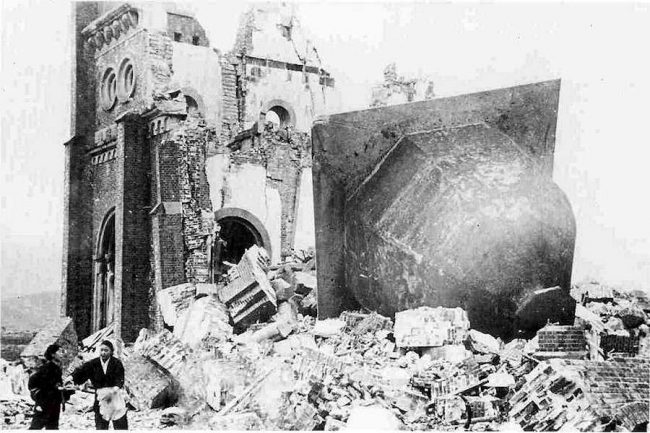 Nagasaki, Japan, Nov 25, 2019 / 01:35 pm (CNA) – When Pope Francis offers Mass during international trips, an image of the Marian devotion of the country he is visiting is usually placed near the altar. On Nov. 24 the image used at a papal Mass in Nagasaki had an additional significance: It is a sculpture of Mary that survived the explosion of the atomic bomb in 1945.

They call her the Virgin of Nagasaki or the Burnt Virgin. On Aug. 9, 1945, it was at the altar of the former Urakami cathedral, just a few blocks from the epicenter of the explosion of an atomic bomb dropped by American forces during the Second World War.

Originally the bust was part of a wood carving sculpted abroad and given to the cathedral in 1920. It was inspired by the painting of the Immaculate Conception by Spanish painter Bartolomé Esteban Murillo.

The bomb that destroyed Nagasaki was dropped at 11:01 in the morning. That day Catholics were praying the novena of the Solemnity of the Assumption of Mary, for which a Mass was held. Everyone in the cathedral died, incinerated by temperatures exceeding 7,000 degrees. More than 35,000 people died in the city within hours; thousands more died in the months to follow. The cathedral was left in ruins.

When the bust was found, the face of the Virgin seemed fatally damaged, with empty eye sockets, and the cheeks and hair charred, and a crack on the left side of the face which, some believers say look now like tears of the Mother of God.

The image, also known as the Virgin of Urakami, is now placed in the new city’s new cathedral, built in 1959 on the ruins of  the first one. It has become a symbol of peace and the fight against the use of nuclear weapons.