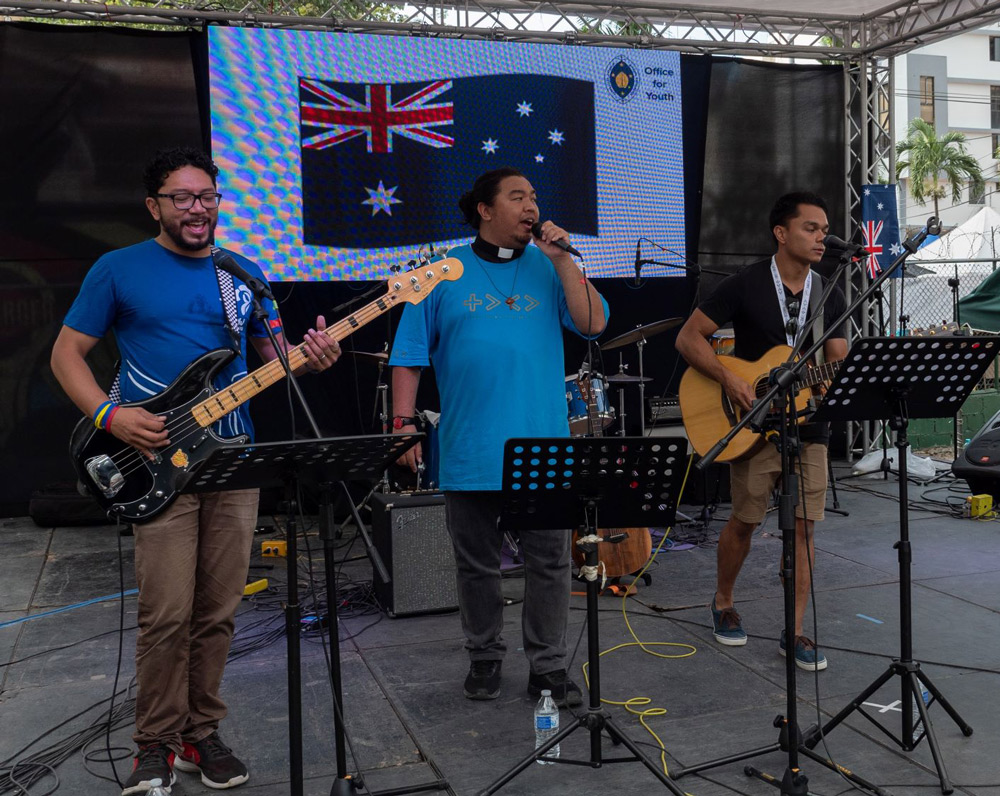 Music was one of the features of the Australian gathering in Panama. (Photo: Diocese of Parramatta)

Australian pilgrims had a busy first official day at World Youth Day Panama, with 700 gathering for an Australian event before joining tens of thousands of others for the opening Mass.

Australian pilgrims have descended on Panama after spending time visiting holy sites in nearby countries, including Mexico and the United States.

In his address to the gathering, Sydney Archbishop Anthony Fisher OP said: “We come together this week, young people with their lay leaders, pastors, and pope as a living-breathing, singing-dancing, praying-acting proof that the Catholic Church is alive and well.”

Canberra and Goulburn Archbishop Christopher Prowse encouraged the young Catholics gathered to remember the three L’s: the lost, the last and the least.

The group then walked through the hot midday sun to Cinta Costera Square for the opening Mass.

Reflecting on her early experiences, Brisbane Catholic Education teacher Brooke Litzow, 28, said: “As a pilgrim at the opening Mass amongst the multitude of people, I felt special – in a way that I have never felt before. Just beautiful. What a wondrous experience.”

Broken Bay Diocese Deacon Adrian Gomez, writing on his WYD blog, explored the many surprising experiences of taking part in the pilgrimage, linking the challenges of the journey with the growth and change that happen in one’s spiritual life.

Deacon Gomez wrote: “Discomfort is part of the pilgrimage experience. In the spiritual life, when growth and change happen, there can be discomfort and pain. When we exercise for the first few times, there is a feeling of pain. But as our bodies are strengthened over time, the pain lessens.”

In all, more than 1000 Australians have made the long journey to Panama. Official WYD figures suggest fewer pilgrims are attending than in previous years, but numbers will still exceed 100,000 travellers from 156 countries.

More than 20,000 local volunteers and almost 2500 international volunteers are supporting the event, with 2500 journalists from around the world among those capturing the sights and sounds of the 34th World Youth Day.