British comedies, a French magazine in the mail each month and a morsel of dark chocolate – these were the simple joys of Sr Mary Agnes, a dignified woman who died on May 12 at the Carmelite monastry in Red Hill.

Such indulgences were a far cry from the 91-year-old Mother Prioress’s early days in the Melbourne convent she joined at 22, where food was sparse, the work hard and the life austere.

“We used to sleep on a paillasse which was a thin mattress of straw,” Sr Bernadette recalled.  “They were dreadful.

“Sr Mary Agnes joined in 1950 when the life was very severe and austere.  The sisters would be up at 4.30am and break their fast after Mass with a slice of bread and half a cup of milk.

“It was a vegetarian diet so the sisters may have had something to eat at 10am and again at 4pm and that was it.  It was real physical labour and a lot of the girls found it hard to sleep.  They’d be working in the vegetable garden and see a ledge and dream of having a nap. “It was a life of penance and suffering, as it would have been for St Therese in Lisieux.”

The Jansenistic culture was brought to Australia by the French Carmelite nuns but changed when the Founding Superior died.

(Jansenism was a theological movement in the 17th and 18th centuries that emphasized original sin and human depravity.  It originated from Dutch theologian Cornelius Jansen.)

“Sr Marie Teresa made sure we had decent blankets,” Sr Bernadette said.  “If you are not well fed and warm you can’t pray.”

Born as Colleen Beattie in Auckland on August 30, 1928, Sr Mary Agnes was the fourth of five children.  Her father John was a returned soldier who died when Colleen was 20.

She did bookkeeping before sailing across the Tasman in 1950 with Moya Ryan to join the Carmelite convent in Melbourne which was founded in 1922.

“I suspect their Kiwi accents would have been a novelty for the sisters when the strict Carmelite Silence was suspended for recreation periods,” Sr Bernadette said. The name Sr Mary Agnes would have been given to Colleen about six months after arriving.

“It signals belonging,” Sr Bernadette said. “You have been accepted by the order and have given yourself to God.”

Taking first vows in 1952 and final vows in 1956, Sr Mary Agnes spent the next 18 years at the Kew Monastery before moving to Canberra with five sisters in 1974 to establish a daughter house.

A derelict family home in Red Hill was on the market and looked ideal for a convent, thought the Mother Superior.

With a keen intellect and passion for politics, Sr Mary Agnes relished the close knit community that grew around the Carmel, obvious in their annual fetes and small army of loyal helpers. 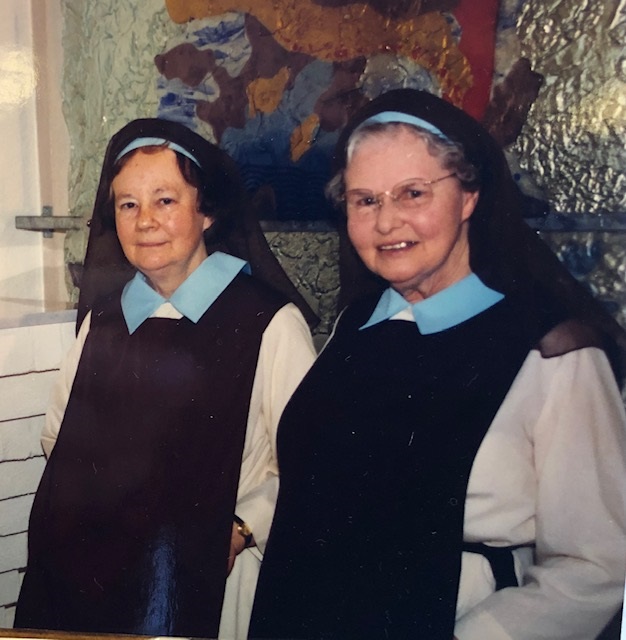 “St Therese was her best pal.  She subscribed to a monthly Carmelite magazine from Lisieux and used to bring it to evening recreation and translate the articles as she read them to us.”

The death of four of her sisters between May 2017 and October 2018 was hard for the Mother Prioress.

“She was very much a mother to us and no mother wants to lose her children,” Sr Bernadette said.

On Mother’s Day, two days before she died, Sr Mary Agnes chatted to her only living sibling, her 99-year-old sister Joan who lives in Wellington.

The next day, Sr Mary Agnes was on the phone again, to Pat’s wife Mary, offering condolences.

She had spent a lovely afternoon with friend Anne Kelly and the sisters had evening prayer in the lounge.  After a bit of tea and some television, Sr Bernadette was walking Sr Mary Agnes to her room when she had a fall.  She died at about 9.30pm with the sisters surrounding her.

While Sr Bernadette cared for the Mother Prioress, that didn’t stop some playful teasing.

“I’d tease her and call her darling but she took it in the spirit it was meant, with affection and respect,” Sr Bernadette said.

“It’s the practical things I will miss, like preparing her breakfast each morning; some bread and butter and vegemite with some coffee and fruit.

“She was a simple woman and would eat what you put before her.

“But she always said a bit of chocolate would fix anything.”

A well-spoken nun keen for some good jokes Two things were important to Sr Mary Agnes before she died; knowing the fate of Cardinal George Pell and the visit of the relics of St Therese.

“They were the two things keeping her alive,” said friend Anne Kelly.

“Sr Mary Agnes was captivated by the Cardinal Pell case and so pleased with the High Court decision.  The next day I took in The Australian newspaper and read every article at her bedside.”

The Mother Prioress had a deep love for St Therese and was delighted to host the relics of the French saint and her parents Louis and Zelie.

A retired lawyer, Anne and husband Doug, who died in 2015, had lived in Canberra since 1980 but did not know about the Carmel until the early 1990s when her Uncle Arthur in Melbourne urged the pair to visit.

“One of the nuns at the time, Sr Tharsicius, was Uncle Arthur’s wife Betty’s niece, so sister and I were related,” Anne said.

The enterprising nuns soon put Doug and Anne to work, handing them the lucky dip stall at the Carmelite fete before the couple took over the book stall.

“It was an enormous job,” Anne chuckled.  “We cleared our double garage for four months to fill it with books.”

Despite a 13-year age difference, Anne and Sr Mary Agnes had much in common including an appetite for politics.  They grew up in the same area in New Zealand and shared the same elocution teacher Miss Knight.

“We were both educated by the Mercy nuns in Auckland; Sr Mary Agnes at St Leo’s in Devonport and I was at St Mary’s in Ponsonby,” Anne said.

“One day Sr Mary Agnes recited an Elizabeth Barrett Browning poem the way Miss Knight would have taught us, emphasizing the right words.  It was very funny.

“Lately I had been reading her poetry but she wanted something light and asked for some good jokes.  She was a lot of fun.”

There’s an old motto attributed to American Postal workers that goes something like this: “Neither rain, nor snow, now sleet nor hail shall keep the ... Read More