Cardinal Cassidy remembered for life of service to the Church 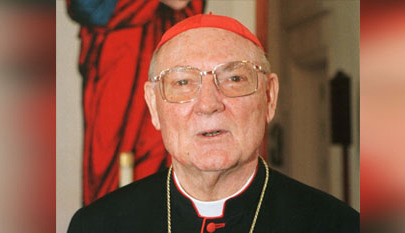 The former President of the Pontifical Council for Promoting Christian Unity, Cardinal Edward Cassidy, died in Newcastle, Australia, on Saturday, at the age of 96.

The Church in Australia and around the world is mourning the death on Saturday of Cardinal Edward Idris Cassidy, President emeritus of the Pontifical Council for Promoting Christian Unity.

“Cardinal Cassidy showed not only diplomatic skill and political astuteness, but also human authenticity and common sense,” said Archbishop Mark Coleridge, the President of the Australian Bishops’ Conference. “There was a simplicity in it all – the simplicity of a man called to high office in the Church but with his eyes firmly on Jesus Christ.”

Cardinal Cassidy was born in Sydney on 5 July 1924. Ordained a priest in 1949, he entered the Pontifical Ecclesiastical Academy in 1953, after studying Canon Law at the Pontifical Lateran University in Rome. He entered the diplomatic service of the Holy See and held diverse posts in various countries before being promoted, by St John Paul II in 1988 to the position of Substitute of the Secretariat of State for General Affairs. He continued in that post until 12 December 1989, when he was appointed President of the Pontifical Council for Promoting Christian Unity, assuming at the same time the role of President of the Commission for Relations with Judaism.

Created cardinal in 1991, he resigned from the presidency of the Pontifical Council for the Promotion of Christian Unity in 2001, having surpassed the age limit two years earlier.

Archbishop Coleridge recalled the Cardinal’s “friendly and down-to earth” manner in his years of service in the Vatican and in particular during his years at the head of the Department for Christian Unity.

Various prelates in Australia added their own tributes. In a message of condolence, Archbishop Anthony Fisher, OP, of Sydney, highlights the “remarkable legacy” he left on the Church, “especially in the field of ecumenism.” Archbishop Fisher added, “Few other Australians have had such a profound impact on the Catholic Church on the international stage and I’m sure he will continue to inspire Church leaders for many years to come.”

Meanwhile, the Archbishop of Melbourne, Peter Comensoli remembered Cardinal Cassidy as “a wonderful man of God and servant of the Church, and a terrific Australian.”

What does it mean to be laicised, defrocked, or dismissed from the clerical state?

DENVER, COLORADO: Archbishop Theodore McCarrick was laicised this week. What does it mean to be “laicised,” “defrocked,” or “dismissed from the clerical state?” Read More