The group with His Eminence Cardinal Guiseppe Versaldi, Prefect of the Congregation for Catholic Education

In 1851, in a position paper titled “Present Positions of Catholics in England,” Cardinal Newman wrote: ‘I want an intelligent, well-instructed laity. I wish you to enlarge your knowledge, to cultivate your reason, to get an insight into the relation of truth to truth, to learn to view things as they are, to understand how faith and reason stand to each other, what are the bases and principles of Catholicism…’

Cardinal Newman could equally have been speaking in 2019 to the current Archdiocese of Canberra Goulburn Catholic Education Commission (CEC) members, who recently took up the invitation of Australian Catholic University to participate in an Education Executive Symposium in Rome, entitled ‘Catholic Education – Perspectives in an Increasingly Secular World’. 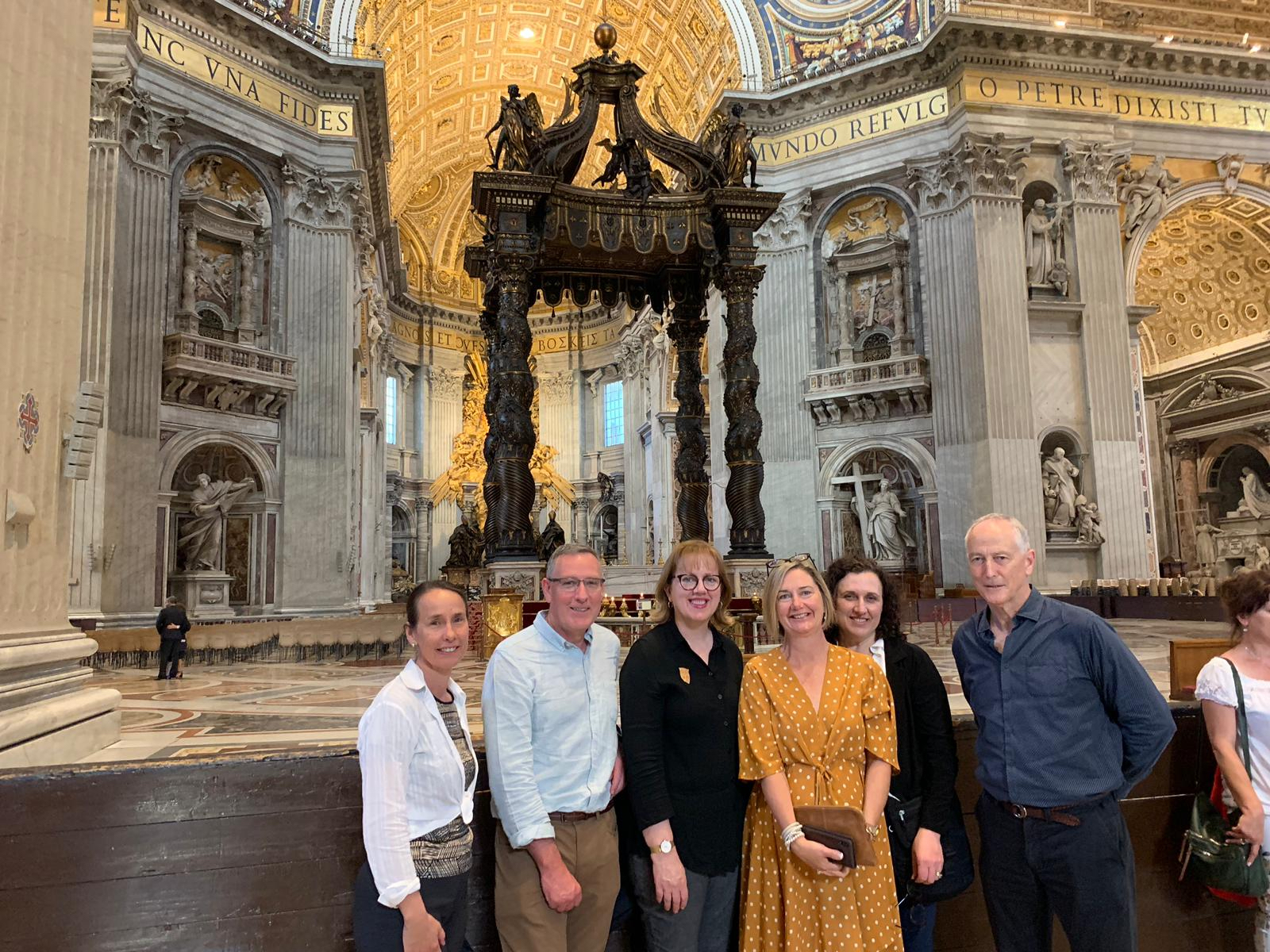 While in Rome, the group visited St Peter’s Basilica

It was a very formative experience for each of the travelling party, which included Tim Elliot and Margaret Cicolini (representing Catholic Education), Karen Motyka and Gabrielle Sullivan (parent representatives on CEC), Frances Robertson (Principal representative on CEC) and Fr John Woods (Archdiocesan Vicar General for Education). The Symposium was also very worthwhile in formulating a considered response to contemporary challenges for Catholic Schools, now and into the future.

The high-level dialogue included presentations from Cardinal Giuseppe Versaldi and Cardinal Peter Turkson, who challenged educators to consider and affirm the position of Pope Francis to provide the opportunities for integral human development. Giving witness to the centrality of Christ’s love was the key to human flourishing. Archbishop Paul Gallagher reminded the group that teachers in Catholic schools are instrumental in more than 20 million young lives across the world. The universal role of Catholic education was affirmed.

This was supported by internationally renown education experts who provided fresh light on the trend of contemporary education. The success criteria for quality transformational education were outlined. There was also a powerful presentation by the McKinsey group on organisational structure and change.

The group was also graciously invited to join the Australian Ambassador to the Holy See, Ms Melissa Hitchman for an evening reception. They were joined by Brigidine Sisters, Claire, and Louise, who shared their current mission in working with La Croix International, to end human trafficking. They were able to demonstrate that the work of the Church is broad and is meeting the needs of a 21st-century world. Fr John was joined by Fr Anthony Ekpo to concelebrate a private Mass in a Chapel at St Peter’s Basilica. The group was also present and acknowledged at a Papal Audience. Formal lectures were supported by a visit to witness the work of the Sant’Egidio Community and travelling to Sienna to learn about the work and life of St Catherine, a radical role model.