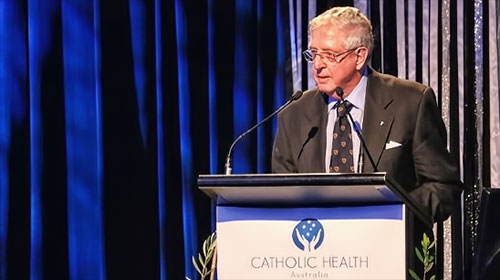 The ‘refounding’ of Catholic healthcare in Australia, built on the healing mission of Jesus Christ, requires a constant response to the needs of today, including the growing health effects of loneliness, says Marist priest, Fr Gerald Arbuckle.

Fr Gerald gave a keynote address at the recent Catholic Health Australia conference in Melbourne, in which he said that so much change is taking place in Catholic healthcare that a ‘refounding’ is required.

“By re-owning this experience – with its faith-inspired hopes in the midst of enormous challenges – people are passionately inspired to adapt the founding experience in dramatically new ways to meet contemporary needs.

“For this process to begin and continue, we need people with the qualities of the founders of Christian healthcare here in Australia. They will know that traditional methods of ministry are no longer relevant. Today’s responses can become tomorrow’s problems.

“Since the 1990s there have been wonderful instances of refounding in our sector. First, many of the original sponsoring congregations have developed new appropriate canonical 2 sponsoring structures, that is, public juridic persons. And there is greater awareness of the ongoing need for high-quality the education and formation of lay staff in the founding mission of our Catholic health and aged care ministries – namely the mission of Jesus Christ, our ultimate founder.”

In looking to the future, Catholic healthcare providers should be alert, as the religious founders of Catholic health services were, to new social and poverty diseases.

“Thus, my emphasis, for example, on the growing social disease of loneliness. Our mission of healing calls us to discover ways to respond to this disease,” Fr Gerald said.

“Loneliness is an inescapable and painful fact of human experience. Loneliness is not only afflicting adults. It is on the rise among teenagers.

“There are two qualities that mark loneliness. People feel excluded and rejected. At the same time they yearn to be intimately in contact with others. Yet, not only individuals experience this loneliness. Cultures do also. Entire cultures can feel politically, economically or socially excluded and oppressed.

“What causes exclusion? True, individuals may cause their own loneliness, but more commonly cultural forces are the catalysts for social and political exclusion, as this book describes, for example: racism; ethnic discrimination; economic and/or political inequalities, refugee/asylum status; individualism and greed; abusive and bullying employers. In a world of increasing fundamentalist movements of “wall-builders, door-slammers and drawbridge-raisers” groups are being pushed aside, unwanted in a world, powerless, lonely. Loneliness exists where it did not before.”

Yet, Fr Gerald said, loneliness is more than this emotion.

“The lonely person is more likely to become physically ill. Current multidisciplinary investigation has concluded that chronic loneliness is ‘a serious risk factor for illness and early death, right alongside smoking, obesity and lack of exercise’. It has been estimated that living with air pollution increases one’s possibility of dying early by 5 per cent, being obese, 20 per cent; misuse of alcohol, 30 per cent; but the impact of loneliness, 45 per cent.”

Fr Gerald suggested Pope Francis’ call for a “revolution of tenderness” is the antidote to the loneliness epidemic, a revolution which can begin with something as small as a friendly greeting.

Barnardo's 2015 Mother of the Year, Chauntell McNamara, can’t understand why a family’s desire to adopt foster children is not embraced by the social services ... Read More