Consider the Crows: The history of the Diocese of Wagga Wagga As the Diocese of Wagga Wagga rejoices in the long-awaited appointment of their new bishop, the publication of their 100-year history called “Consider the Crows’ finally hit the bookstores.

The rural Diocese of Wagga Wagga was separated from the Diocese of Goulburn in 1917.

With increased farm sizes, greater mechanisation, and technology as well as the movement of younger people to urban centres for education and employment opportunities, most rural towns suffered from a dwindling population. In general, however, the Catholic community in Wagga Wagga across most of that hundred years has seen steady growth.

With no comprehensive history of the Diocese previously produced, Consider the Crows was commissioned for the celebration of the diocesan centenary. Parish priest and Seminarian Lecturer, Fr Justin Darlow was entrusted in 2015 by Bishop Hanna to create a comprehensive chronicle of the 100 years of the Catholic Diocese of Wagga Wagga. Fr Justin had just returned from studying in Rome for a licentiate in theology with a specialisation in church history when tasked with writing the book.

“It was decided that I was well suited for the job,” Fr Justin said.

“At the end of 2015, I decided to do some on the ground research myself. I aimed to visit every parish in the diocese, take photographs, and interview people to collect any localised publications,” Fr Justin said.

“Although I was the one tasked with writing the book, I soon realized that there are many skills in our diocese that I could make use of,” he said.

His research also took him to Rome where he accessed the Propaganda Fide Historical Archives and the Vatican Secret Archives – now known as the Vatican Apostolic Archive – which is the central repository in the Vatican City of all acts promulgated by the Holy See.

“I was also able to collect information from several other archives around the country. We have our local diocesan archive and the archdiocesan archive at Canberra-Goulburn was a great help.” 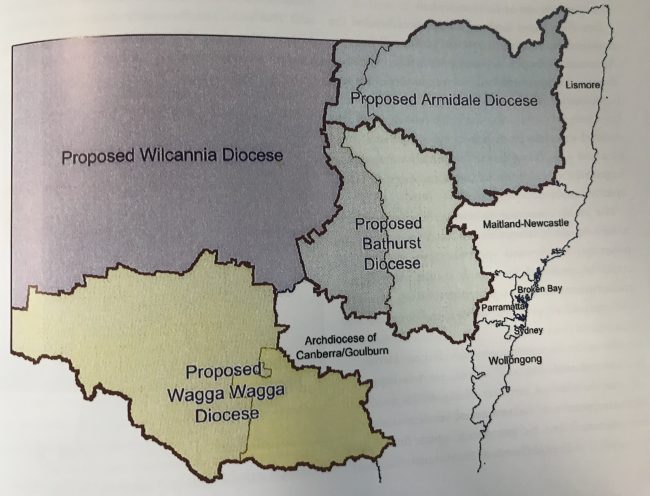 The title of the book Consider the Crows provides a rich history in its self. The name ‘Wagga’ is derived from the local Wiradjuri Aboriginal language on whose land the City of Wagga Wagga now grows. It is widely accepted that ‘Wagga’ means ‘crow’ and to create the plural; the Wiradjuri people repeat the word. Thus Wagga Wagga translates as ‘the place of many crows’.

“I think this informed the first bishop’s choice for the diocesan’s motto,” said Fr Justin.

“Crows are very much part of our countryside here in the Riverina, and the books title and the diocesan motto speaks to us of the Providence of God.

“He feeds the crows. So how much more will he look after us? ”

Asked if there was anything that makes the Diocese of Wagga Wagga unique, Fr Justin explained one standout would be their Seminary.

“Most of the other seminaries around Australia are located in metropolitan centres. So that’s a significant difference that we have here in Wagga Wagga. However, like most country diocese, it has its own unique story which is very much like a kind of a patchwork quilt.” Fr Justin explained.

“There are many smaller stories within it that produce a beautiful image that can be shared and enjoyed by those who read the book.” Five years in the making Consider the Crows author Fr Justin was quick to acknowledge the input from a variety of people.

“I had an editor and a publisher, and they both contributed massive amounts of time and energy to put this together with me…Bishop Hanna reviewed content along with Bishop Carroll, who reviewed his chapter directly.

“I also had eight to ten people who reviewed almost the entire content of the book, so there were several levels of assistance and also many reviews that took place during  the process.”

When asked what he would now do with his ‘spare time’, Fr Justin laughed and said he would be discerning with Bishop Mark Edwards.

“The diocese is very grateful to finally have our bishop here after such a long wait. We are also very grateful to Archbishop Prowse for looking after us for these years, but we knew that ultimately a new bishop was required. So I’ll be discerning with him exactly how he would like me to contribute to the diocese going forward.” Consider the Crows, Centenary of the Catholic Diocese of Wagga Wagga can be purchased from the Canberra Catholic Bookshop contact (02) 6239 9888 or visit the website at https://www.catholicbookshop.org.au/

The Australian Catholic Bishops Conference has called for the Australian Government to move quickly to hold a referendum on an Indigenous Voice to Parliament once ... Read More