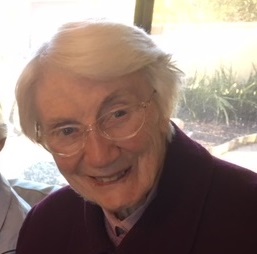 Sr. Mary John Keenan R.S.M. who passed away on August 18th was farewelled from a packed church and Requiem Mass celebrated at Holy Trinity Church Curtin on August 26th. Her brother, Fr. Patrick Keenan, CSSR, and Monsignor John Woods were chief celebrants along with thirteen other concelebrating priests.

Sr. John was born in Griffith N.S.W. on September 30th, 1932. Her father, Daniel, left County Derry and her mother, Elizabeth, left County Cavan at a time when to be a Catholic in Northern Ireland was dangerous. Daniel and Elizabeth met in Griffith N.S.W. where they were nourished among the rich vineyards and orchards of that area. Theirs was a staunch Celtic faith, firm in conviction, grounded in the sacramental life of the church and outgoing in the service of others. They instilled that faith in their children, Patrick, Michael, Maureen (known to us as Sr. John) and Peter. It is hardly surprising that Patrick and Michael joined the Congregation of the Most Holy Redeemer (Redemptorist Fathers,) and Maureen joined the Sisters of Mercy, while Peter married.

The bond of blood and faith was a strong thread throughout Sr. John’s life and she always enjoyed spending time with Fr Pat and Fr Mick and celebrating every milestone in Peter’s family. Special to her were births, baptisms, first communions, confirmations, weddings, and jubilees. She surrounded herself with photos of these occasions, and more importantly, she knew she was relied on to pray for her family through any anxieties or concerns they may have, as she placed them before Christ on the altar in her daily Mass.

To her life as a Sister of Mercy, she bought her unique Celtic Catholic Faith with its combination of prayer, realism, mischief, and determination. At the Profession of her religious vows, on January 6th, 1954 Sr. John chose as her motto “It is the Lord” (Jn 21:7) the words spoken by the disciple whom Jesus loved, after the appearance of the Risen Lord on the shore of Tiberias. This motto she faithfully identified with throughout her life, as she responded to the joys and the sorrows of others in her daily ministry.

Many years were spent in primary education throughout the Wagga and Canberra Goulburn Diocese, in which she proved to be a gifted and capable teacher, earning the respect of children and parents alike.

Her gifts of practical wisdom and acceptance of others were recognised by her Congregational members when she was appointed community leader, and later, Congregation Provincial, to which roles she brought a lightness of touch, a loving care and an ability to see the brighter side of a tricky situation, as well as always finding justification for fun and celebration.

Sr. John had a particular love and concern for priests. Monsignor John Woods recalled how he sometimes chatted after the parish Mass at Curtin and she was always positive and affirming. “I suspect that my experience was that of many priests as it was evident that her first and last concern was for your welfare. It was little wonder then that in her final days the Sr. John was visited, blessed and anointed by a procession of priests to her hospital bed at Calvary Retirement Village.”

During her twenty years of Chaplaincy at Canberra Hospital, she was the one who stood beside people in the long and weary extremities of serious illness and inexplicable suffering. Her ability to listen gently and without judgment helped patients to see the face of Christ and the Church in their grief and pain.

Archbishop Frank Carroll sent apologies that he could not attend her funeral, but he wrote in 2006 when Sr. John retired from hospital chaplaincy:

“We speak of people who are living legends and national treasures. I believe that Sr. John qualifies as both of these.”

“During her long and faithful years of service, she has won the respect of and affection of all sectors of the hospital community. Patients, staff, fellow workers in Pastoral Care, knew her quirky sense of humour, down to earth common sense and unfailing support and care. They have recognised too, her deep spirituality and prayerfulness that have given her service a special quality and motivated her spirit of generosity and self-sacrifice.”

In retirement for fifteen years in the Holy Trinity Parish, Sr. John was a familiar figure at daily Mass, is often seen outside the church having a quiet chat to whoever needed an attentive ear and a listening heart.

In introducing his homily during Mass, Monsignor Woods said “it would be fair to say that Sr. John was organised. The scripture readings and hymns for her requiem were chosen by Sr. John. They bespeak a woman of faith.”

“Consider the First Reading from St Paul to Titus where he insists that it is not because of our good works but through “the water of rebirth and renewal by the Holy Spirit” that God saved us. In other words, her life was but a response to God’s initiative lived in humility and genuine faith.”

Sr. John believed and lived out of the understanding that death was but a stage in life and that for each of us, and I quote from our First Reading, “there is a house built by God . . . an everlasting home”.  While Sr.John had an eternal vision, she was very much grounded in the present. This reality together with her own human shortcomings, no doubt saw Sr. John acknowledge her own weaknesses and trust in the Lord’s mercy, as the Psalmist today calls us all to do: “For it is with Yahweh that mercy is to be found”.

Our Gospel reading from St. John (14:1-6) is one that is often read on the occasion of a funeral. It goes to the heart of why we are here. Jesus tells us to trust in him. He promises us a room in his Father’s house.  There we will be truly at home. Sr. John walked the Way of the disciple. She rejoiced in the Truth of God-with-us. She reflected the Light of God’s presence in her ministry.

I think it appropriate to acknowledge especially the love and friendship that Sr. John shared with the late Sr. Germaine. Her passing was not without deep impact on Sr. John as they had worked closely and lovingly together in many areas of ministry.  As one author put it so simply: “All great friendships help both parties. Your true friend joins you on a voyage across the ‘sea of self’ whose encounter neither can know as they board.  And which will change them both.”

Sr. John, like Mary, the first disciple, was a woman of faith, mercy, action, and constancy, and we can be assured, that although she is no longer here, she is elsewhere, she is everywhere. Today we offer our thanks for her life, and pray that her work on earth is done, she may now rest in peace.

This article was sent to the Catholic Voice by Kathy Patterson, Community Support Assistant of Central A, for the Institute of Sisters of Mercy Australia and Papua New Guinea.

Caring for your wellbeing during stressful times

We are currently facing an unprecedented health crisis across the globe.  It has impacted upon our cities, our workplaces and our homes. When humans face ... Read More