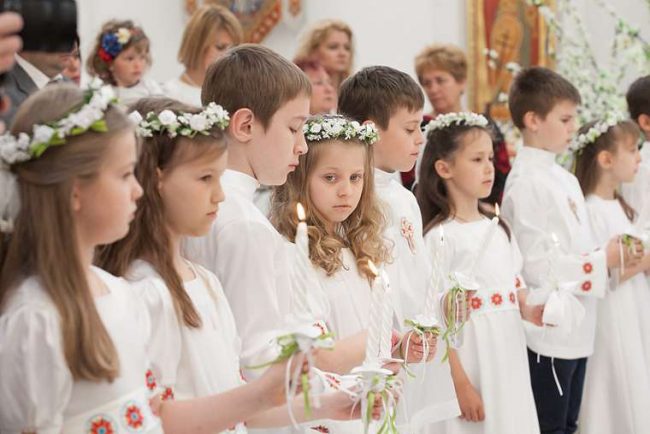 Dublin, Ireland, Dec 4, 2019 / 02:23 pm (CNA) – Catholic sacramental preparation must change to stress the primary role of families and to reach students who do not go to Catholic schools, said Archbishop Diarmuid Martin of Dublin this week. The archbishop announced a shift in sacrament prep from schools to parishes and families.

“We must remember too that more and more Catholic children today attend other than Catholic schools,” Archbishop Martin said Dec. 3. “The proposal is not something that will be accomplished overnight; it cannot however be put forever on the long finger. We must begin now.”

“It will take some time to put in place an effective development of parish capacity to implement this initiative,” the archbishop continued. “We need, however, to begin immediately with the preparation and training of voluntary lay catechists and the development of resource materials.”

The changes could mean more sacramental preparation for students outside school hours. Catholic schools are currently allowed to set aside up to 30 minutes a day for faith formation, the Irish Times reports.

In March 2019, an archdiocesan spokesperson suggested that Ireland is unique in its dependence on schools to prepare for and celebrate the sacraments.

In May, the archdiocese released the results of the online survey which drew responses from 1,800 religious, clergy, parents, parishioners, and teachers. The participants expressed a desire for a transition from the school-led sacrament preparation to more formation based in the family and church.

Respondents voiced dissatisfaction that the sacraments are “largely a school event” and schools “feel they are still working in a vacuum.”

Teachers and religious leaders expressed concern that sacramental preparation in schools currently treats the sacraments as more of a social event rather than something spiritually important.

“The sacraments are not conveyor belts. Sacraments are moments of faith, not just social occasions,” Martin said in a February video.

The archdiocese’s Council of Priests recently passed a resolution advocating the importance of sacramental preparation for Baptism, First Reconciliation, First Communion and Confirmation that focuses on supporting parents “in sharing faith with their children.” It said the parish should assume responsibility for sacramental preparation and celebration of these sacraments.

The council recommended that the archbishop set up an implementation group to develop a communications strategy, a planning strategy, guidelines for a consistent diocese-wide approach to baptism, and a proposal for the future practice of the Sacrament of Confirmation.

Preparations began in September 2018, when the archdiocese set up a sacraments review group to consult and make recommendations around the sacraments. The effort sought to reach many people, and special focus groups sought out young parents who were not regular churchgoers.

While the archbishop suggested that the bulk of sacrament prep would be moved from schools to parishes and families, his letter also called for a renewed relationship with Catholic schools to promote a “Catholic ethos” and to deliver a Catholic spiritual formation program for children attending the schools.

Across Australia, Church leaders pray for survivors, write to faithful

Catholic leaders are praying for survivors in the wake of Cardinal George Pell’s conviction for historical sexual abuse, but also seeking to support their local ... Read More