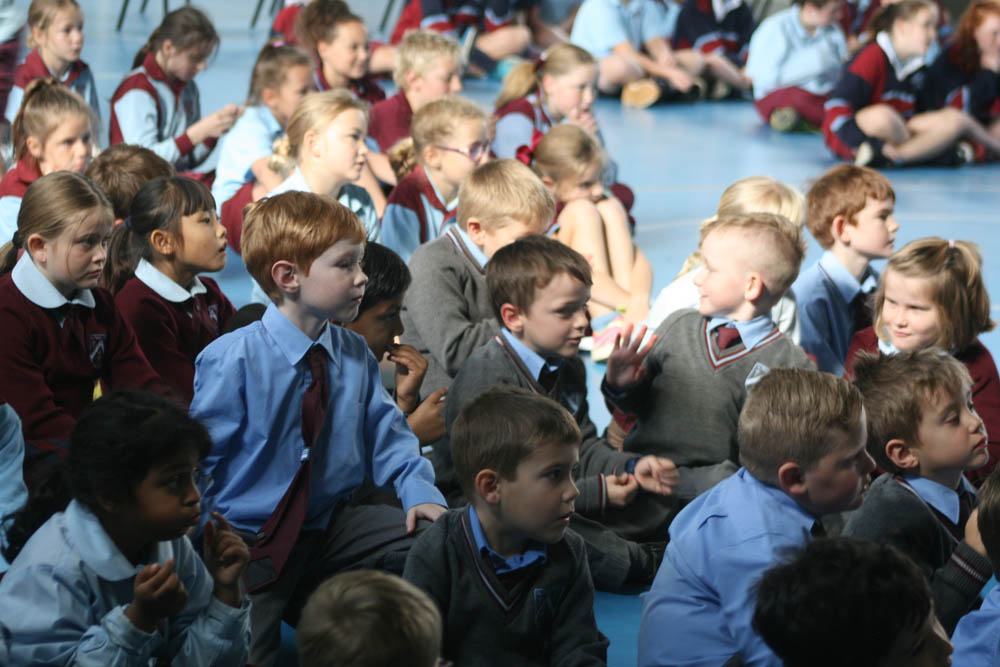 Some of the audience for the school’s first Spelling Bee. Photo Chris Gordon.

It was a hard sell, to convince a room full of primary school students that a Spelling Bee could be as gripping and exciting as a sporting event.

But by the time it reached the business end of the competition, no convincing was required as the students were cheering and yelling as loudly as they would for any team.

The event was the inaugural school Spelling Bee for St Peter and Paul’s Primary Goulburn. An idea from Principal Kathy Neely with input from teacher Greg Angus among others, the aim was to not only to lend a focus to literacy, but also to show tests of intelligence can be as exciting as displays of sporting prowess.

Miss Neely said the idea came up as a precursor to the School’s Spell-a-thon. “We already had a Spell-a-thon planned to raise some money, and I was wondering what we could have as a little event to promote it, because it can be pretty dry just spelling some words in your class room,” she explained.

“So to make it a bit of fun we came up with the idea of a school Spelling Bee.”

Greg Angus, a teacher at St Peter and Paul’s, had some experience of Spelling Bees from the United States and had some ideas on how to run the event and, with some help from Google, he and Miss Neely gave the competition its shape.

“We’d both seen documentaries made about spelling competitions and with Greg’s background being from America, where Spelling Bees are quite a popular part of American and Canadian schooling where he’d been involved in some before, we thought we had a format that would work,” Miss Neely said.

Split into two age groups – Years 3 and 4, and Years 5 and 6 – students would each have a demonstration round where they would hear the word and then hear it used in a sentence. If it helped, small tablet-sized white board were provided so they could write the word down before spelling it out.

After the demonstration round, each student went through five progressively harder rounds, with incorrect attempts knocking a student out of the competition. If, after the final round, there was still more than one student in contention, they’d be given another word each and if there were still multiple students in play, they’d share the win. Sounds simple, but it’s another thing under lights and with a few hundred students looking on.

The students in the audience took a little while to been drawn in, but as student after student fell by the wayside, they became more gripped.

You could hear the proverbial pin dropped as students weighed up the correct spelling, you couldn’t hear yourself think when the cheers followed a successful attempt.

The Year 3/4 competition finished with a particularly dramatic climax – literally – with just two students remaining and student Oscar Martin asked to spell DRAMATIC. Chevell Ward was asked to spell PREHISTORIC and in the end Chevell won with Oscar runner-up.

The Year 5/6 competition also came down to a final two playoff. This time, when the words DYSLEXIA and DACHSHUND were read out, even some of the teachers traded nervous glances, perhaps glad they weren’t able to win.

Nadine Jassani ended up the outright winner, spelling Dyslexia, and Vasilious Papazoglou was runner up with Dachshund.

Miss Neely said the response was very positive and the event would now probably be an annual fixture.

“I think the students were apprehensive to start with but they really got into it in the end,” she said.

Please note: the thumbnails of some of the photos appear to be rotated to the right, however they are the right way up when clicked.

Exploring the layers of meaning in iconography