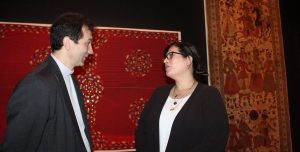 DOZENS of items from the Vatican’s Anima Mundi Museum are part of a new exhibition at the National Museum of Australia that seeks to explore Islamic faith and culture.

Almost 70 of the 120 objects in the “So That You Might Know Each Other” exhibition came from the Vatican’s vast collection of pieces from around the world.

Most of the Vatican objects that are part of the exhibition were gifts from the Muslim world to Pope Pius XI in the 1920s, when he announced he would be holding an exposition to showcase the cultures of the world.

Fr Nicola Mapelli, director of the Anima Mundi Museum, which means “Soul of the World”, was in Canberra for the recent launch.

He said the Vatican’s enthusiasm in supporting the exhibition shows the deep respect the Catholic Church has for other cultures.

When the items currently in Australia are on display at the Vatican, Fr Mapelli said their place alongside the great Catholic masterpieces from Renaissance masters is a demonstration that “for the Vatican Museum, beauty is a universal thing; it is something that belongs to all cultures”.

A similar exhibition featuring a large number of items from the Vatican was held in Sharjah, in the United Arab Emirates, in 2014.

The Sharjah Museums Authority has provided more than 40 items for the current Australian exhibition, with another dozen items collated from Australian collections.

Manal Ataya, director general of the Sharjah Museums Authority, said “So That You Might Know Each Other” is a “unique exhibition devised to give a glimpse of the diversity of Muslim material culture, and is intended to foster intercultural dialogue and promote tolerance and peace – among Muslims the world over and between Islam and other faiths”.

National Museum of Australia director Matthew Trinca said he believes the exhibition has the power to help bridge a gap in cultural and religious understanding when it comes to Islam and its relationship with other faiths and communities.

Fr Patrick McInerney SSC, director of the Columban Centre for Christian-Muslim Relations, said in Australia there is an overwhelming spirit of openness and dialogue between adherents of the world’s two largest faiths, though there remain misunderstandings and even fears about the Muslim community.

“For the little bit of animosity that is around, the best cure, the best antidote is meeting Muslims face to face, getting to know one another, and that’s precisely what this exhibition offers,” he said.

The “So That You Might Know Each Other” exhibition runs until July 22. To learn more go to http://www.nma.gov.au/exhibitions/so-that-you-might-know-each-other

Stock up on Tupperware and move people off the streets