Exploring the layers of meaning in iconography 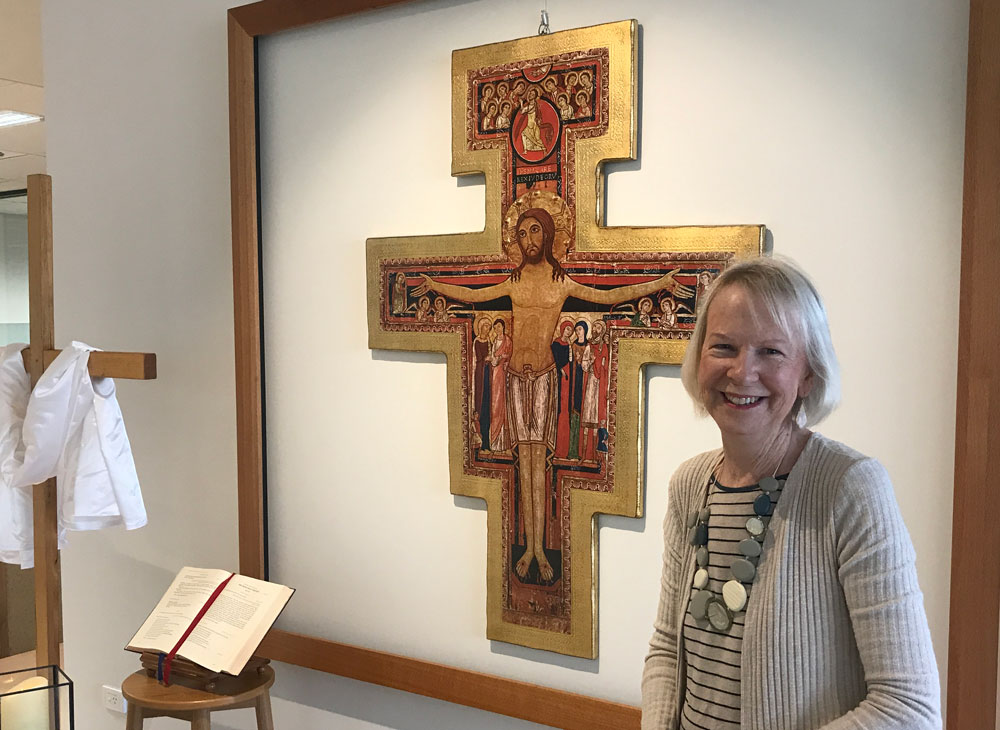 Sue Orchison in front of the San Damiano Cross icon on the first floor of St Christopher’s Pastoral Centre. The San Damiano Cross is the cross before which St Francis was praying when he is said to have received the commission from the Lord to rebuild the Church. Photo: Chris Gordon.

It’s an overused word – icon. And for the most part, a misused one, often used to describe prominent individuals.

One dictionary definition describes an icon as a devotional painting or artwork of Christ or another holy figure.

But iconographer Sue Orchison has a more vibrant definition.

“Iconography is theology in colour,” she said.

“An icon is a representation of Christ… of saints, angels, the Mother of Christ. It’s usually made in egg tempera or in brass, although some people use acrylics these days.

“But essentially an icon is making the unseen visible. So when we see an icon of Jesus or Mary, we know that it’s not actually them, but we know that there are there with us. When we look at the image it is meant to help us relate. The icon is a door… a door into heaven, a door into `the other’.”

As part of her great love of iconography, Sue has organised the Images of the Divine Iconography Exhibition, which will be running from Friday May 31 to Sunday June 2 in the Haydon Hall in St Christopher’s Pastoral Centre Manuka.

The exhibition features work by 15 local iconographers showcasing their icons from the last 20 years.

For novices to iconography, Sue points out that one of the things that differentiates iconography from other forms of art is the materials used.

“The medium we use for Iconography is egg tempera,” Sue explained.

“It was used with the Egyptian mummies in their tombs when they put a sarcophagus with the face of one of the pharaohs or any of the people there just to remember and identify them. And that egg tempera is still as pristine now as it was 3,000 years ago. It’s lasting.”

Egg tempera, she explained, is made up of egg, earth, rabbit skin, glue, wood and cloth. In this way, she adds, this combination of God’s creation goes into making this new creation, an icon.

“And then you’ve got the pigments, like ochre and titanium and zin and malachite and lapis lazuli, and all of these earthy things that are combined with the egg which is preserved with wine to allow it to last.”

In addition to the materials used, Iconography is rich with its own symbolism and codification. Looking at one item, an icon of Mary holding baby Jesus, Sue points out that the gold edge represents heaven. The lip around the edge indicates a boat that carries us. The red in Mary’s clothes represents humanity and the blue around her represents divinity… reminding us that Mary is human but she is cloaked in the divine.

Saints and apostles are depicted in a certain way but consistent way as well. You can tell St Paul because he’s bald, or Peter has bushy hair and a beard.

“In the trinity icon for example, which was created in the 1400s, there’s a space in that icon for you, the viewer, to come and sit with the father, son and spirit,” Sue added.

Sue’s interest in iconography came later in life but her interest in art has been enduring. She always loved art and painting, especially portraits, but put that on hold when she began to raise her family. It was a chance encounter that drew her to iconography.

“When the kids went to school, I was walking by the Catholic Bookshop back when it was in Favier House and there was a leaflet advertising the iconography school in Narrabundah,” Sue remembers.

Sue concedes that the process of creating icons is not for everyone, even though she believes the appreciation of iconography is open to all.

Egg tempera, she says, is a difficult medium to work in which few people aside from iconographers work in it these days.

“And when you start on an icon it’s like starting a jigsaw puzzle and you have to work out every step in advance… how will the white work with the red. It also teaches you a lot of patience because you’ve got to work in very thin layers and wait until they dry, and then apply another layer.”

But for all of that, Sue believes her discovery of iconography has been one of the most exciting experiences of her life.

“It’s exciting, enjoyable and very rewarding and I want to share it with the world,” she said.

WASHINGTON D.C. For the ever-shrinking number of millennials who are practicing Christians, could evangelisation be on the chopping block? Read More