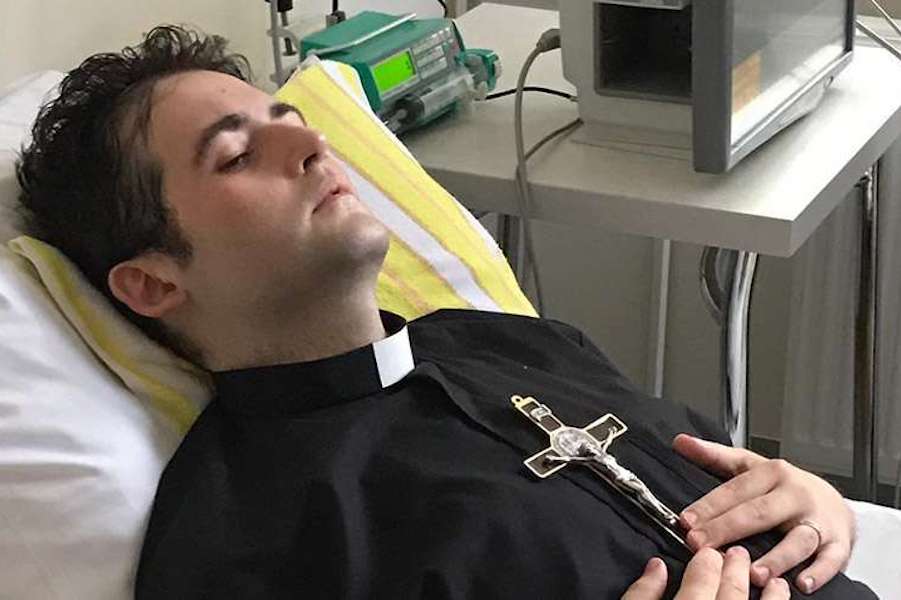 WARSAW, POLAND: May is ordination month in many dioceses, but the ordination of Fr. Michal Los, FDP, a member of the Orionine Fathers, was far from your typical ordination.

On May 24, Los was ordained a priest in his Warsaw hospital bed.

Los was diagnosed with cancer a month ago, and is now in critical condition. Pope Francis granted a dispensation allowing him to be ordained both a deacon and a priest in the same Mass, and Los was ordained by Bishop Marek Solarczyk of the Diocese of Warsaw-Praga.

The day before his ordination, Los made perpetual vows in his religious community. Photos of that were shared on Facebook by Biloxi Vocations, along with a video of his ordination.

Permission was granted to the director general of the congregation, Fr.  Tarcisio Vieira, to whom Pope Francis sent a letter.

Also present at the ceremony were the vicar general of the Orionine Fathers, Fr.  Oreste Ferrari, the counselor general, Fr. Fernando Fornerod, and the Orionine Province of Our Lady of Czestochowa, Fr. Krzysztof Mis. Los’ parents and sister also came, along with other Polish members of the congregation.

“The ceremony took place in an atmosphere of great and profound spirituality. After the initial prayer, the litany for the intercession of the saints followed for the life of Michal and for his congregation,” said Fr. Fornerod in a Facebook post about the event.

The day after his ordination, Los celebrated his first Mass from his bed.

On May 25 with a video posted on Facebook, Los, thanked Catholics who prayed for him, asking for more prayers and offering a blessing with the sign of the Cross.

“Praised be Jesus Christ, thanks for all your prayers and I hope you continue to praying, I bless all of you in the name of the Father and the Son and the Holy Spirit,” the young priest said on the video.