‘May he rest in Peace, May he rise in Glory’

Brian Thomas Maher was born in Corowa on the 12th September 1936.

His parents being John Edward Maher and Pauline Clare Keefe. He was baptised in Balldale, NSW, 4th October 1936.

Brian’s mother died when he was just four years of age. Brian had a brother Kevin, who predeceased him.

He attended St. Lawrence’s, Galong, for primary schooling and then St. Gregory’s, Campbelltown, for secondary schooling.

He completed a Bachelor of Science, embarking on the journey of tertiary study in 1954, majoring in Agriculture, from the University of Sydney, with honours.

In 1972 he completed a Diploma of Religious Education (Corpus Christi College, London) and then backed this up with a Primary Teachers Certificate in 1970 (Signadou College).

In addition to his parochial appointments, Father Brian was hospital chaplain for the Canberra Hospital (1968-69), Director of Confraternity of Christian Doctrine (1970-1977), Diocesan Director of Pontifical Mission Societies (1973-1988), and Diocesan Chaplain Young Christian Students (1973-1976).

Besides a faithful and fruitful ministry as a Diocesan Priest, Brian became renowned for his significant contributions in documenting the history of the Archdiocese. His history of the Archdiocese, Planting the Celtic Cross, published in 1997, has, is and will be widely acclaimed.

Father Brian was awarded the Medal of the Order of Australia (OAM) in June 2009, with the citation reading:

For service to the Canberra Region through historical organisations, and the Catholic Church of Australia.

In 2011 he was appointed by Archbishop Mark Coleridge as Archdiocesan Historian indefinitely. 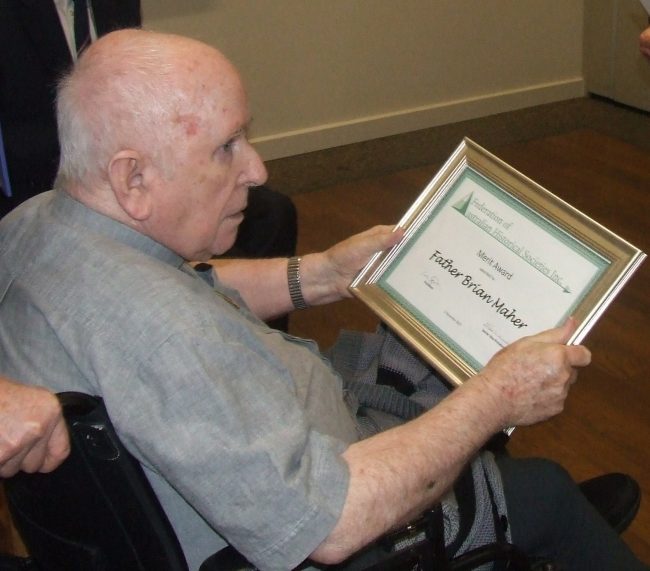 In his pithy letter of appointment, the Archbishop wrote:

The appointment pays tribute to the splendid contribution you have made to the Archdiocese and seeks to encourage you to pursue your historical work.

You have been a guardian of memory and, as such, you have pointed to the future.

I thank you for what you have contributed and I look forward to seeing the fruits of your work in years to come.

May God who never forgets us, bless you and your work in every way.

Local Missionary inspired by the performing arts and music

On October 18, parishioners and friends met at St. Joseph’s, Merimbula to hear an inspiring talk by Kate Lewis, a full-time volunteer missionary with YWAM. Read More