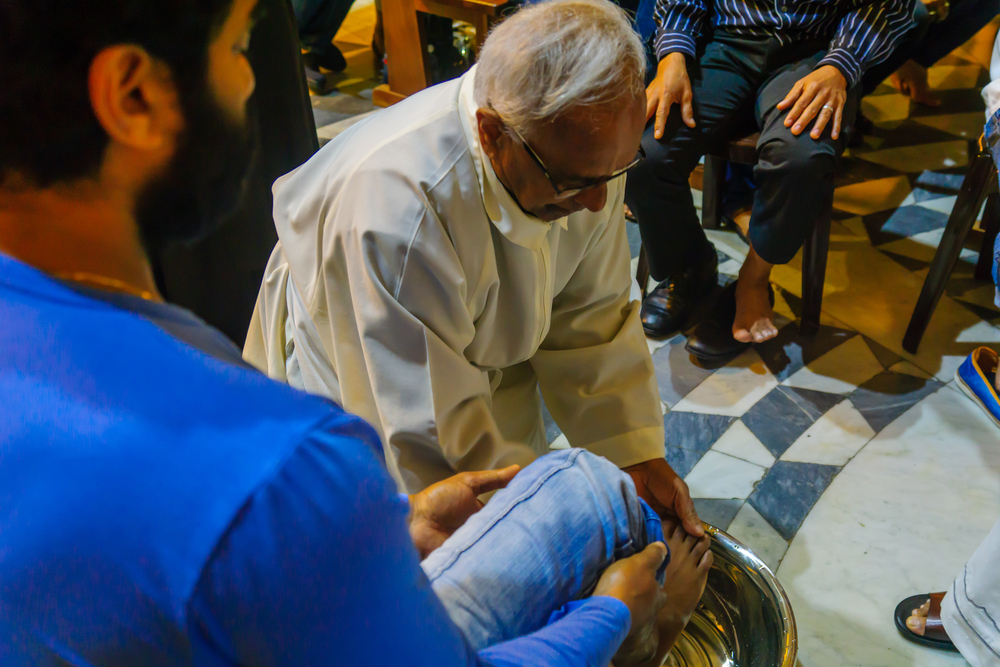 I am married to a scientist who is incredibly practical and who was brought up in a non-religious household. His two older siblings were christened, but Charlie was not. I, on the other hand, grew up in a family who attended Mass very regularly and, being from a town of 300 people in total, my family played a large role in undertaking the various ministries. My mum organised rosters and she and I did a lot of the reading, my brothers were the altar servers and my dad was always the ‘plate’ collector.

My husband comes to Mass with us on important occasions in the Church season such as Easter and Christmas, as well as school Masses and the odd, ‘ordinary’ Sunday Mass. I don’t recall ever asking him to do this, but I’m assuming this is his way of showing the respect he has for the decision we made to raise our children as Catholics.

Last year, Charlie came along for the Easter Vigil. I had already been to the washing of the feet on Holy Thursday where I was amongst one of the twelve to have my feet washed (and kissed) by our Parish Priest. Recalling this ‘ritual’ to my germ-a-phobe husband involved tears of laughter as I convinced him that I was telling the truth (he was also very keen to know about the calibre of the other feet that Fr Joshy had to nuzzle!). I’m sure he came to the Easter Vigil with high hopes of witnessing another not-so-common Catholic practice. And that he did. However, I’m not sure he gained as much amusement as he had from my feet-story!

We were welcomed into the Easter Vigil service with battery operated candles and took our seats. It was hot, and pews can be very tempting fortresses for toddlers so we sat up the front, to the left of the main centre pews to be near open doors and with a little more leg room. The congregation was then herded back outside for the Blessing of the Light service, around a fire. Back inside, Mass began and immediately children were called up for Children’s Liturgy. Unbeknownst to Charlie, I had offered my assistance to the lady who was rostered on, if it became apparent that there were a large number of children, due to it being Easter. As the number of children approaching the altar grew, I got up and headed off to help out. We had organised for another parishioner to come and get us during the Prayers of the Faithful as we knew it would be a longer than usual service. Picture this, my non-religious husband, now completely on his own, and a little unsure of where on earth I might be, sitting up the front, in full view, hot, unfamiliar with many of the gestures and prayers, ‘enjoying’ the Litany of the Saints, the Blessing of the Water, the Renewal of Baptismal Promises, a lengthy Homily and the ‘usual’! When I returned to my seat with the girls, his eyes spoke a thousand words, and I wasn’t sure how to break it to him that we hadn’t yet begun the Liturgy of the Eucharist! I have been told there were a couple of times when he put his head in his hands, much to the amusement of people in the parish community who know Charlie’s religious background!

I am very grateful that my non-believing husband, who thinks that the connotations the word ‘atheist’ conjures up is harsh and ‘pretentious’, appreciates the importance of my religion and what that means to our family. It’s not always easy to explain to the children why Daddy doesn’t kneel or explain to my darling husband that, yes, he does need to offer the Sign of Peace even though he finds it confronting (in his words, “it freaks me out”) but we’re fumbling our way through the explanations and not doing too badly so far. My eldest is seven and, for now, content with the reasoning that, during summer, Daddy has to mow the lawn and, during winter, he has to cut firewood, which is why he doesn’t attend Mass with us every Sunday. I know that this will not always be a satisfactory ‘reason’, but I do feel secure in the fact that our children will not doubt the respect Charlie has for their Mum and her weird feet-kissing beliefs!

This article was first published in My Family My Faith Magazine

More than 50 people, including some medical personnel, attended a screening of the documentary film Fatal Flaws on Sunday August 18 at the Haydon Hall. Read More