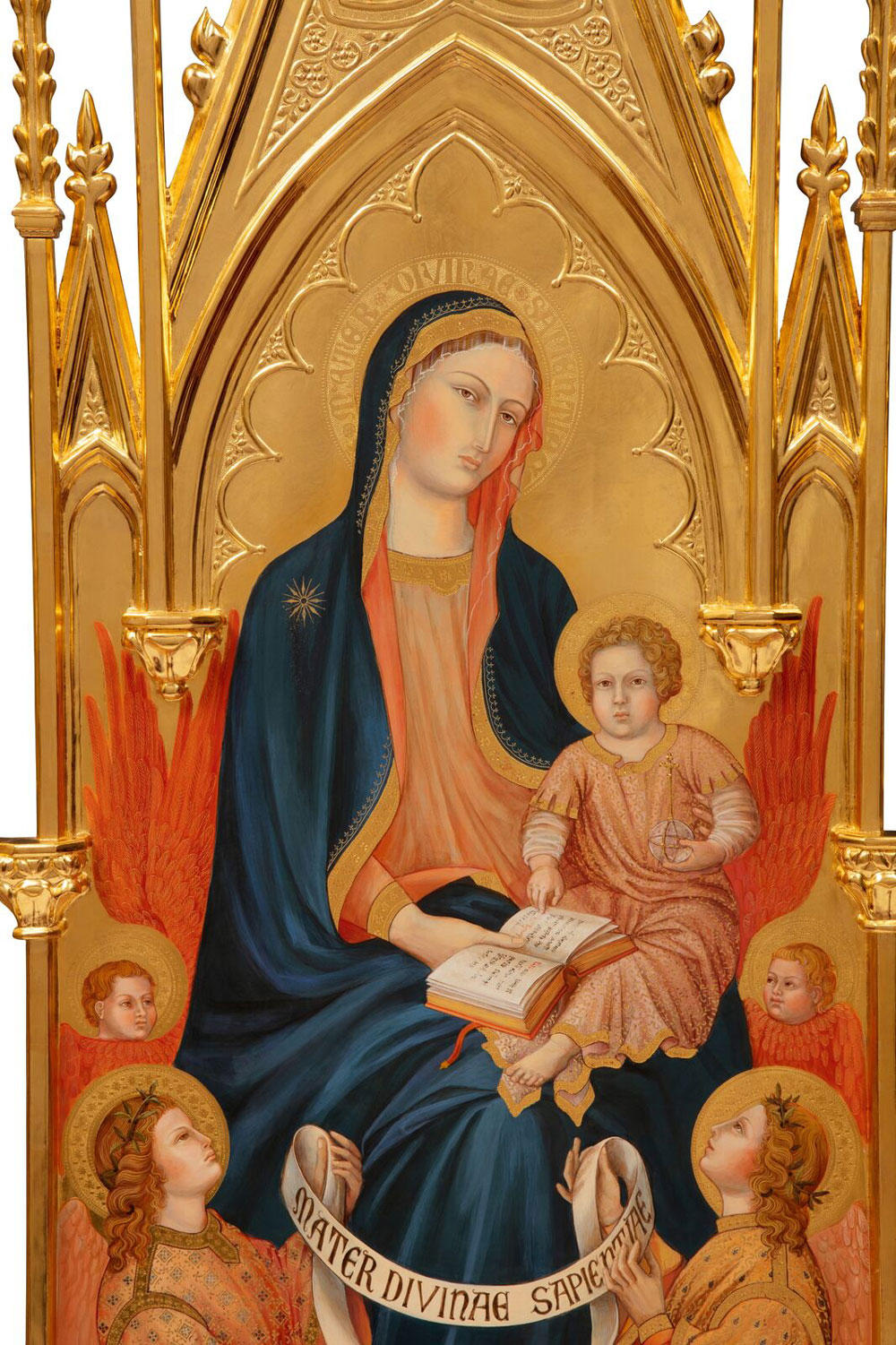 The work, The Mother of Divine Wisdom, Saint Joseph and Saint Mary of the Cross MacKillop, was created in Italy by Chiara Perinetti Casoni, an eminent artist based in Siena who crafts perfect recreations (not reproductions) of 14th and 15th century Sienese art using ancient materials and techniques, including centuries-old wooden panels, powdered lapis lazuli for blue, and real gold.

The Medieval Sienese art style flourished between the 13th and 15th centuries and is celebrated for its decorative style and rich colours depicting elegant figures within a religious context.

The triptych is unique in Australia and is not a copy of any existing work. It has three distinctive panels: the centre panel depicting Mary Seat of Wisdom (Patron of Catholic universities worldwide), flanked on either side by St Joseph (Patron of the Sisters of Saint Joseph) and St Mary of the Cross MacKillop. As St Mary always wore a traditional religious habit, there is no artistic difficulty in including her in a medieval composition.

The work will be permanently displayed in the Our Lady Seat of Wisdom Chapel at ACU’s North Sydney Campus.

ACU Vice-Chancellor and President Professor Greg Craven said the commissioning of the unique artwork was in keeping with the traditional artistic endeavours of the Catholic Church as a patron of the arts, and with ACU’s undertaking as a university to promote art and culture.

“This extraordinary acquisition will make an important addition to the ACU art collection while contributing to the significant role the Catholic Church has played in supporting the arts,” said Professor Craven.

“The Church sponsored the work of many of the great renaissance artists such as Michelangelo, Raphael and Bernini, who went on to create some of their masterpieces within the walls of the Vatican.

“Fostering culture through supporting the arts is central to the mission of ACU. As a university, we are committed to enriching the cultural life of the community.”

Ms Casoni said the triptych has been created in the style of an early 15th century painting by Taddeo di Bartolo, an Italian painter of the Sienese School during the early Renaissance. She took inspiration from Bartolo’s triptych, The Virgin with the Child, Angels and Saints accompanied by Saint Catherine della Notte, located in the Chapel of Holy Mary of Scala in Siena.

“It was natural to be inspired by the work of Bartolo, it is very congenial to me and his works represent the highest school between the Gothic and the Renaissance,” said Ms Casoni.

“My mission has been to create a wonderful and surprising work like the furnishing of a flame that shines fluctuating. I imagined that this work placed in the Our Lady Seat of Wisdom Chapel could arouse a spontaneous desire to pray. I had the vision of the Mother of Divine Wisdom with the Son who brings this Divine gift from Heaven to the earth. So, I was looking for an atmosphere of solemnity.

“In the central altarpiece I painted the Virgin, she is very beautiful, as in Bartolo’s painting, we look at her, even her ultramarine blue coat is in the ancient iconographic tradition. The Christ Child differs greatly from that painted by Bartolo, I imagined a tender and intelligent Child Jesus, a small great sage whose spiritual power was tangible.

“I drew from the purest source of the Sienese school: Duccio di Buoninsegna. I was inspired by the Baby Jesus of the Maestà Altarpiece at The Museum Dell’ Opera della Metropolitana in Siena. I think it’s the most beautiful, solemn image. He is innocent and wise at the same time.”

The University will confer an honorary degree of Master of Arts on Ms Casoni during her visit to Australia in recognition of her unique skills in continuing a tradition of art that has endured for centuries.

I understood straight away that this was an historical subject and could eventually become part of the history of the University because images of Saint Mary MacKillop don’t exist. At the beginning of the last century when she taught the poor how to read and write, without anything in return, she was like a sister to Saint Joseph. Saint Mary MacKillop brought literacy to the weakest and the poorest.

This personage really appealed to me, I was given some photographs of Saint Mary MacKillop, taken obviously in the early 1900s because one was black and white, and the other had been coloured.

My commission was incredibly important, as I needed to give an iconic face to this woman and I had to place her next to the Virgin and Child. I needed to sanctify her in the image because one absolutely cannot place a spiritual image nearby to a photographic portrait of a real human person, it’s immediately obvious aesthetically. It’s too conflicting; it either distorts the iconographic image or it raises the person, their face to something saintly.

All the proportions of St Mary’s face, in a spiritual image, are not those of real life.

Clearly 15th century Italian art has helped me, for example Antonello di Messina, who is my favourite from that period. He inspired me a lot in creating the face of Saint Mary MacKillop and in my opinion, it appears more beautiful that of the Virgin Mary next to it because it certainly has an expression.

It was very moving because there was a need in your country to create a painting of this Saint, to give her an image.

The practice is eternal because the technique used to paint, to create the triptych does not differ in any way from the original methods of the 14th and 15th centuries. Every element, every material completely unmodified by anything modern, refers to the highest and most precious school of Siena, the 15th century.