Footprints on the moon: a story of faith and Faith As we celebrate the fiftieth anniversary of man landing on the moon, there are a couple of little known facts that remind us it is a story about faith. And Faith.

But to get to that, you need to backtrack a little.

The decision to go to the moon was, in many respects, as much a matter of small-f faith as it was a matter of science.

When US President John F Kennedy committed to going to the moon with his famous “We choose to go to the moon” speech in 1962, the United States had clocked up a total of just 10 hours experience in space.

The Mercury rockets, which had room for just one astronaut, and claustrophobically at that, had at that stage launched just four times.

That was it. NASA had hardly any of the answers to the questions they’d need to resolve to put a man on the moon.

They didn’t know how to communicate from a continually spinning planet to a spaceship travelling hundreds of thousands of miles away at unheard of speeds.

They had no idea of how to survive in space for days on end, or what effects being in space for an extended period would have on a human body.

And they didn’t know if they could resolve all of these questions and bring all of the elements together in time.

They had far fewer answers than questions, but still they locked in a time frame and committed to go.

It was a ludicrous proposal with way too little lead time. And yet they made it. With just five months to spare.

The moon landing was a testimony to the common faith those involved had in each other… the engineers, the scientists, the astronauts… even the politicians… to get the job done. But from all that they witnessed, it was also an epiphany of Faith for many of the astronauts that looked down on this Earth… this Good Earth… from the heavens (with a small h) above.

The moon landing provided a sense of hope, a sense of peace and a glimpse at the immensity of the Universe in ways people had only dreamed of before.

The backdrop to the moon landing

Placing the moon landing in context, 1968 had been a year in which hope and peace were in short supply.

The Vietnam War raged and the war about the war raged at home.

Civil rights demonstrations took place across America with many injured and some killed in the process.

It was the final test run for a moon landing – its mission: to orbit the moon and return home.

A message to the Good Earth So it came to pass that on Christmas Eve 1968, against a backdrop of a year of fear and violence and chaos, as the Astronauts looked down on Earth in a way no human had ever done before, they took pause, and read a passage from Genesis:

We are now approaching lunar sunrise, and for all the people back on Earth, the crew of Apollo 8 has a message that we would like to send to you.

And God said, Let the waters under the heaven be gathered together unto one place, and let the dry land appear: and it was so.
And God called the dry land Earth; and the gathering together of the waters called the Seas: and God saw that it was good.

And from the crew of Apollo 8, we close with good night, good luck, a Merry Christmas – and God bless all of you, all of you on the good Earth. 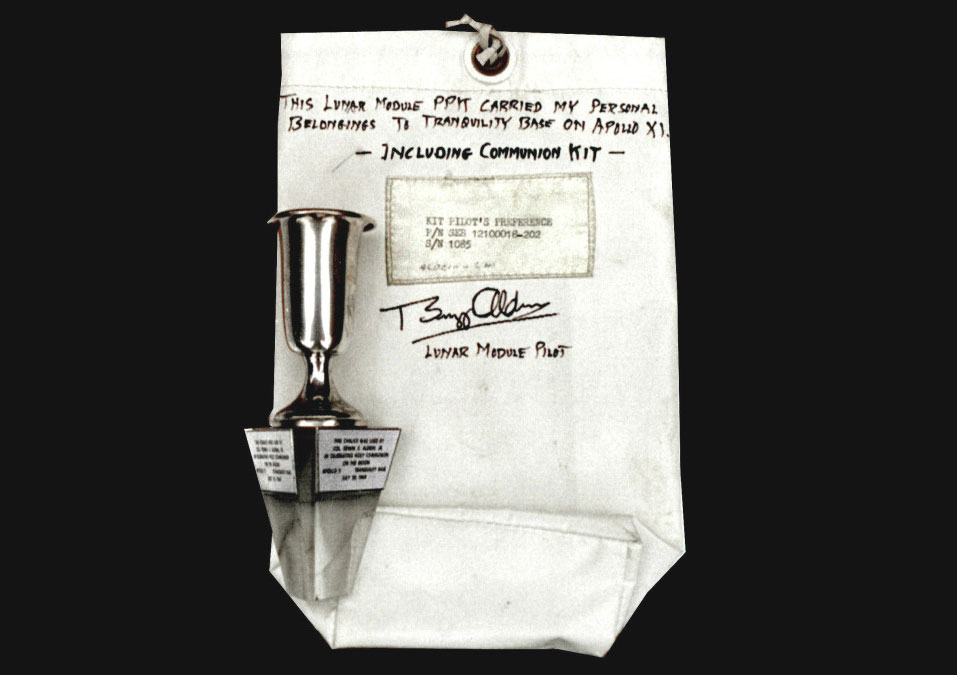 The chalice Buzz Aldrin took to the moon. Photo: NASA.

It was a beautiful gesture. It was a gesture that gave witness to the Astronaut’s awareness of the enormity and beauty of the universe and his humility at his place in it.

But it was also a gesture that became the subject of legal action when a founding member of American Atheists sued the United States for violations of the first amendment.

Skip ahead to July 20, 1969… the day before the first footsteps were placed on the moon. It was a Sunday.

Each Astronaut was permitted to take a very small amount of personal effects on the mission, and Buzz Aldrin, a Presbyterian elder, took a kit that had been blessed by his pastor, containing communion, wine and a chalice.

NASA advised that they weren’t allowed to broadcast the religious observance due to the legal case, but Buzz took the communion and the wine anyway – the first food and liquid ever eaten and drunk on the moon – and said, as it turned out, to no audience:

“I’d like to take this opportunity to ask every person listening in, whoever and wherever they may be, to pause for a moment and contemplate the events of the past few hours, and to give thanks in his or her own way.”

The speech was not overtly religious but nonetheless it wasn’t broadcast. But as a piece of history, it exists as one man’s demonstration of the impact seeing our world, and the universe it sits in, from such a perspective.

For Aldrin, it was a recognition and a demonstration that he believed God is present in all our endeavours, and that no matter how mighty the achievement, God is there with us.

A Matter of Faith 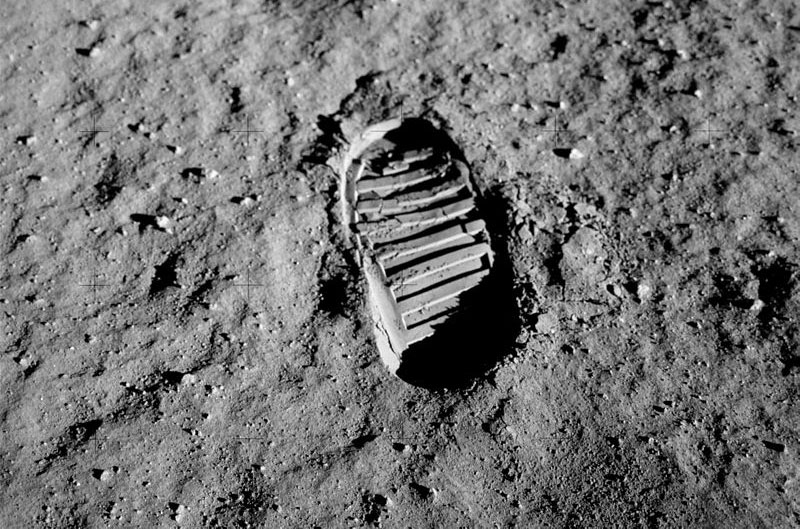 Six Apollo Missions successfully landed on the moon. That includes 12 astronauts who stepped foot on that alien landscape, and six others who circuited the moon ready for their return.

For those without Faith, the moon landing and all of the efforts that contributed to it, are still an amazing, unequalled achievement. Armed with few of the required elements and a ridiculously short timeframe, a group of humans banded together to achieve what appeared impossible.

It’s an inspiration for all of us. When faced with seemingly impossible challenges, determination attached to a leap of faith can achieve the unimaginable.

But for those with Faith, there may be an added something. An appreciation that there is so much more than us. A recognition that there are forces at work far beyond our control. An understanding that we are simultaneously insignificant and incredibly special.

Buzz Aldrin’s are among 12 sets of human footprints on the moon. But if you choose to look a lot closer, you might see something more.

They chose to go to the moon. And they succeeded. A moment of faith, and a moment of Faith.