Friendship the long way around for two Edgewater friends 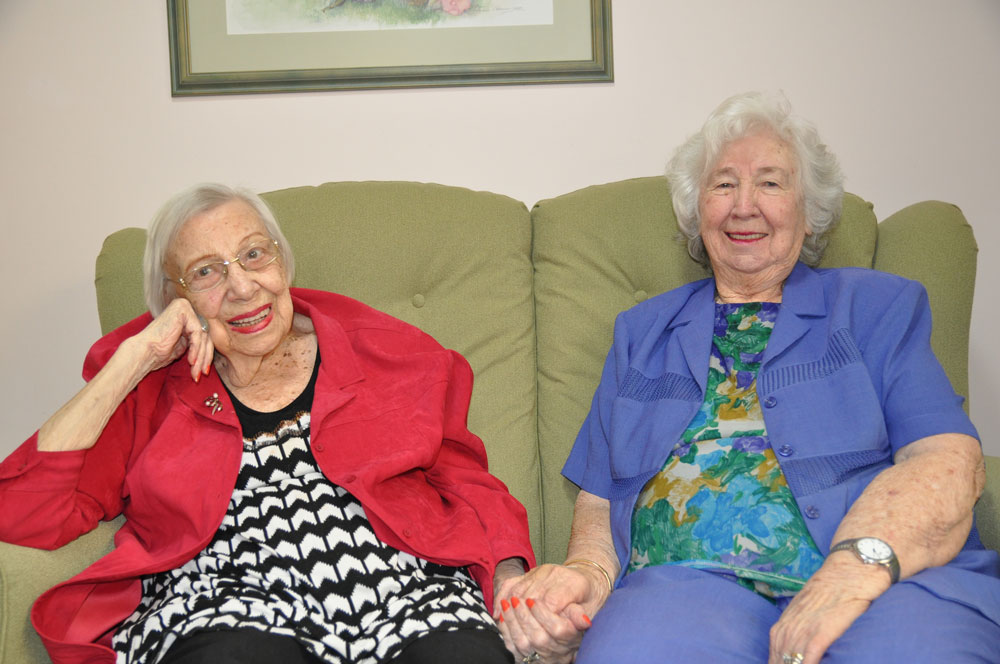 Pieternella Boys and Valma Nunn , who met over 60 years ago, have only become friends in their 90s at Mercy Place, Edewater, WA. Photo: Shine Communications.

International Day of Friendship on Tuesday 30 July will have special meaning for two residents living at Mercy Place Edgewater.

That’s because, despite knowing each other over 60 years ago, when they were in their early 20s, Pieternella Boys and Valma Nunn have only become friends in their 90s, after finding themselves residents at the not-for-profit home, proving that age is no barrier to developing firm friendships.

“Pieternella worked for the department store Ahearns, and I worked for what was really the rival retailer Boans, and we would often see each other to say hello in Perth as we walked to and fro from work,” explains Valma.

“I remember that she was always beautifully dressed, with perfectly painted nails, in fact she was very fashion conscious and she really hasn’t changed that much, she still looks very well-dressed even today.

“Even though we used to see each other quite regularly to nod and say hello, it’s amazing to think that it’s only now that we are in our 80s and 90s that we have become friends after moving in to Mercy Place Edgewater.”

Alison Devonport, Service Manager at Mercy Place Edgewater, says residents had become aware of the historic connection between Pieternella and Valma, and are pleased they have become friends.

“It is heart-warming to see the companionship that has developed between Pieternella and Valma since they struck up a friendship after both moving into the home,” she says.

“We’re fortunate at Mercy Place Edgewater in that many of our seniors have formed strong bonds with fellow residents, and as a result we have a close-knit community where seniors genuinely enjoy each other’s company and friendships flourish.”

International Day of Friendship is a United Nations day that promotes the role that friendship plays in promoting peace in many cultures. It is observed on July 30 each year.

Mercy Health is a Catholic not-for-profit provider of care, founded by the Sisters of Mercy and grounded in a 2000-year tradition of caring for those in need. The organisation provides health and aged care services throughout Victoria, southern New South Wales, Western Australia, Queensland and the Australian Capital Territory.

In Western Australia, the organisation cares for more than 300 people across six residential aged care homes, with 78 retirement living units.