“God Has Big Plans for Me” Jason Howes, the 2020 recipient of the Young Canberra Citizen of the Year Personal Achievement Award, attributes his achievements to “how powerful God is”.

Graduating year 12 and starting a university degree is a common achievement amongst young people. Jason’s story, however, is not common. He graduated from St. Edmund’s College in Canberra at the age of 21.

Born in Colombia as one of 11 children, Jason always wanted to receive an education. However, his family was very poor, and he spent his time collecting recyclables for money rather than attending school. Jason says that “God saved me” when, as a 9-year-old boy, he found himself alone and vulnerable at night on the streets of Colombia. Due to the the help of kind strangers, Jason was taken to an orphanage.

Jason developed a strong relationship with God, saying that there was “a hole inside me that I needed to fill” and that God was able to fill this hole with love. He trusted God to help him get through his time at the orphanage.

It is hard not to see the presence of God when hearing how Jason met his adoptive father. Jon was volunteering as a missionary in the orphanage Jason was living in. They developed a strong relationship and Jon adopted Jason.

Jason’s dream to receive an education finally came true, but not without challenges. Learning a new language and making friends with younger peers was difficult, especially when he started school in Sydney. Things changed when the family moved to Canberra and he started at St. Edmund’s College. From his first visit with the school he said that the “environment was different”. 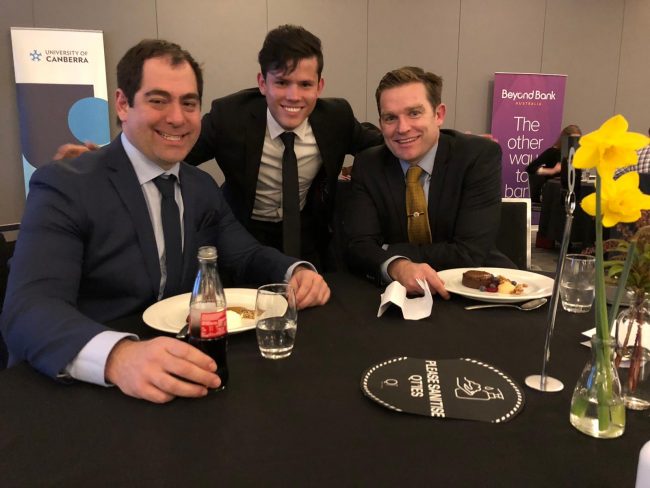 “When I went to Eddie’s I felt they were really welcoming…The way Eddie’s teachers spoke to me was more supportive, and they were more interested in where I came from.”

Michael Monagle, Assistant Principal of Mission and Identity at St. Edmund’s College nominated Jason for the Award. Michael describes how the St. Edmund’s “tailored learning” approach and their staff were able to support Jason. Michael said that “we try and take in all boys and provide them with what they need”.

Through these challenges it was relationships, community and God that helped Jason persist with school and graduate. Jason describes how Jon is “his rock” and has instilled in him a belief that “I could be something”.

Jason begun a Bachelor of Business this year but has changed his degree to Education. His experience with the teachers at St Edmund’s enabled him to witness first-hand the power teachers and an education can have on a child’s life, believing that “education is the way out”.

“I want to be a teacher because in that way I can help kids… If I didn’t have an education I wouldn’t be in the place I am now… I knew in business I could have money, but education is the way to helping kids… I feel like that’s my call and that’s what God wants me to do in my life.”

A clear theme to Jason’s description of his story, and a clear inspiration to those around him, is his acknowledgement of God’s presence in his life.