Haven of healing and hope Residents at The Farm sit with Kate Cleary, at right, and caseworkers as they listen to a presentation. PHOTO: Patrick J Lee

Back in 2017 a tiny but daring seed of hope was planted to offer a new chance to struggling Australian women and their families.

The daring involved was great. The idea to create a wholistic rehabilitation centre called ‘The Farm at Galong’ in a neglected former Mercy convent on three hectares of rundown property in the diminutive NSW village of Galong all came from one Catholic woman.

That woman, Kate Cleary, sensed a deepening vocation from the Holy Spirit to consecrate her life in deeper and more effective service to the desperate and struggling women she worked with in the prisons and often squalid homes near Canberra.

Kate had a clear sense that these women were Christ’s poor in our time, addicted as so many were to drugs, damaged by years of the most degrading sexual abuse and domestic violence, and crushed by relentless cycles of imprisonment, welfare dependence and living on the fringes.

As a religious social worker Kate had encountered many such women struggling with life and was overwhelmed by their dire situation, many caught “in a culture of death” and depersonalisation.

“I realised the range and depth of their needs were so complex that visiting them was not enough, I needed to live beside them and with them,“I found them so deprived and so brittle. They have often lost their children to custody and are alienated from their families. 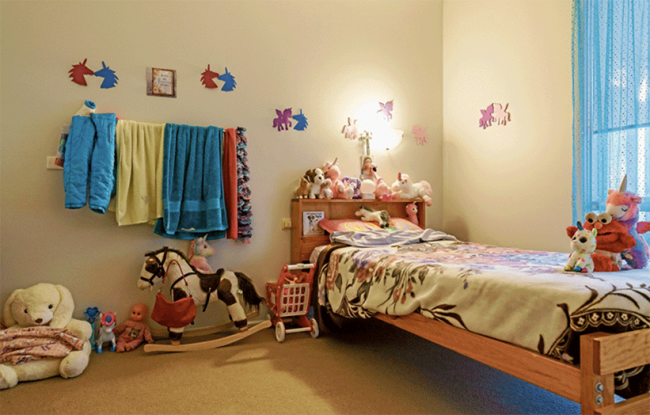 A resident’s bedroom offers a refuge and privacy few of the women have known in their lives previously. PHOTO: Patrick J Lee

“I realised that in so many ways the Catholic and Western philosophical and religious tradition could be mined as a blueprint to help them relearn their own dignity and what we call “self-efficacy.”

She approached her Archbishop, Christopher Prowse of Canberra-Goulburn, and he offered his moral and canonical support, as well as the convent. Kate realised that addiction and substance abuse are deep-seated and intractable symptoms of deeper metaphysical and societal problems in the modern world.

She realised her new plans needed to employ the best cutting-edge wisdom of the faith and of the wider world. So she set about establishing an independent not-for-profit charity and was staggered by the growing interest, generosity and support from both Catholic laypeople and secular professionals in her region.

Where lives are mended

Today there are seven women and five children at ‘The Farm’ and the demand is growing. Kate is the resident CEO of the Farm, which has attracted an enthusiastic team of community supporters and volunteers. It employs in various capacities, a financial administrator, two case managers, a visiting doctor, dentist, gardener and the services of a leading psychologist. The Farm has an active Board and has produced high level reports of its progress.

It has attracted interns studying in law, social work and mental health professions and has been visited by judges and others attracted to this very concrete approach to The Farm’s post-rehabilitation.

At the centre of the work of The Farm is not merely a new method but the unique witness and first-person transformation of the client women themselves. The women who come have been through some detoxification or rehabilitation are referred to The Farm from social workers, from the courts or from exit-programs from the prison system.

Says Kate: “This always involves the gritty and often humbling handwork of time, committed presence, of hands-on and 24-hour support, a type of intensive care in a social setting.”

Kate has noticed that secular counselling alone often leads to recidivism because it is not based on a deeper understanding of the human person. The Farm’s approach is based upon step-wise and collaborative formation with the women in an understanding of their own unique dignity and vocation. 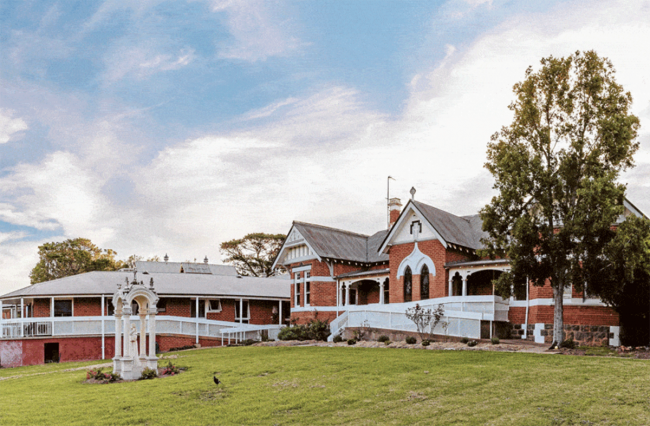 A former convent, The Farm is now a safe space for healing and education in life skills for women Kate Cleary are among ‘Christ’s poor’ in Australia today. PHOTO: Patrick J Lee

Its study program and work encourages a deeper understanding of their yearning for truth and authenticity and the importance of the cultivation of virtue in their lives as a means to experience this.

A clear goal of The Farm is not only to support the women to become free from drug and other addictions but in many cases to restore them to their children who have been removed from their care because of their prison time or destructive drug-related behaviour.

In a sense The Farm aims to restore the women to their own maternal hearts and souls in very practical and accessible ways. The women are offered advocacy for family reunion and are supported in re-learning parenting, financial and household skills as well as using their 12-month residential stay to train-line for work qualifications.

The Farm derives some of its educational and communal culture from the work of the New York-based psychologist and reformer George de Leon and his colleagues, who developed a particular type of integrated residential “therapeutic community.”

This aims to rebuild, within a collaborative community “the whole person” cognitively, emotionally and socially. De Leon has noted that it goes beyond a merely medical or criminal approach to substance abuse and offers not only “treatment” but the “transformation of lives”.

De Leon is a musician/psychologist, who witnessed firsthand in his family and in the “street culture” of the jazz and theatre world of the 1960s the personal devastation and social dysfunction associated with drug and alcohol addiction and the prevalence of “co-occurring” developmental and mental health issues.

There is a strong emphasis within this type of rehabilitation community of emulating a “good family” which offers as it were, a fresh opportunity for the client to learn what “a good life” feels and looks like, within a supportive, safe and yet well structured “intentional” community.

It involves programs which nurture self-discipline, self-understanding, responsibility and maturation so that clients can re-enter the wider society with the skills and motivation to work and form healthy relationships and commitments.

Kate notes that in addition to these integrated and humanistic goals of “Therapeutic Community”, the Catholic insight into the spiritual form and vocation of the human person contributes to the ordering life of The Farm.

She has found real inspiration in the profound insight of Pope Emeritus Benedict XVI who as a Cardinal wrote: “The grand “trip” which people look for in drugs is a perversion of mysticism, the warping of the human desire for immortality, the “no” to the impossibility of overcoming the immanent…” Kate sees in the debilitating addictions of her residents, signs of the destructive addictions of the wider technology-dazed culture; a “pseudomysticism” which distracts us from true contemplation and reflection.

She describes how the women in the Farm’s program (whether they are initially religious or not) are introduced to something like a monastic routine. They are taken away from the temptations of contemporary urban life and technology (at least initially) and immersed in a regular discipline of quiet and mindful time, regular directed study and training and work in and about the Farm’s property.

While prayer and attendance in the chapel are optional, Kate has been struck that so many of the women are drawn to the chapel to remaining silent before the Blessed Sacrament.

Restored by nature and quiet study

Kate notes that in the process of restoring the old convent grounds by cultivating the orchard and the kitchen garden and of learning to grow flowers to bring beauty to their lives, the women put their hands down “into nature” and experience great healing themselves.

The work of cultivating The Farm serves as a tangible metaphor for the cultivation of a new life for these women and their children. The work also transforms the lives of those assisting the women in need. Kate’s unique program of study offers applied philosophy, moral discernment and self-understanding which is remarkably well received by the residents. They begin to blossom in the search for truth, goodness and beauty.

“I sense that my life of consecration to The Farm brings together, as St Ignatius says, the presence of God given to me in my own formation and His presence in the work in each moment of the day.”

Kate is convinced that the expanding work of The Farm is the unfolding of a new social reality and a new charism in the Church. She is praying that more women will be drawn in consecration to this pioneering and restorative life with her.

“I believe this can only be the work of God – through the support and sacrifice of so many good people.”

To support The Farm or to inquire about its emerging mission and charism, contact (02) 6386 7275 or email office@galongfarm.org