This follows their success as winners with fellow Mackillop team members at the recent PSSA Hockey Championships in Newcastle. Remarkably St Mary’s Primary, Crookwell, had a total of six Yr 5/6 girls in this team. This clearly highlights and celebrates the strength of the sport in the district.

Following the PSSA carnival both Isabelle and Bella were announced as members of the NSW Under 12 team.

As members of the NSW U12 team they will compete against other National Teams from Sunday 18th to Friday 23rd August at Hockey Central Victoria, Bendigo.

This huge achievement is sure to be a wonderful experience for both the girls and their families and one they will not easily forget.

We eagerly await results and possible livestream opportunities next week.

The draw for NSW Team is as follows. When did you start playing hockey?

I started playing hockey in Pre School when I was 5. Since then I have played in Goulburn rep teams for the past 3 years which has meant lots of training after school and has helped me improve my skills. I really love going to training.

I have also done COD (centre of development) for nearly 3 years which is over the summer and you get to train with lots of NSW coaches. This is loads of fun with kids from all different areas. We train for a number of weeks and then we go away to a big competition around NSW, this year it is going to be in Bathurst

Do you have an idol who inspires you?

My idol would definitely be Emily Chalker (nee Smith). She is an ex St Mary’s student and she achieved the same dream when she was in Year 5 and Year 6. I have always loved her and have been inspired by Emily and her commitment to Hockey. I am lucky enough to have some of her old gear which is pretty cool. She is very supportive of those just starting out and especially us as St Mary’s girls.

What do you enjoy about hockey?

I love playing with my friends, meeting new people and traveling to new places. Hockey is a great sport and keeps you 100% fit. I felt really, really excited and proud and I got butterflies instantly in my tummy when I knew I had made my first NSW state hockey team. At that stage I was also picked in the Under 13’s NSW state squad which was pretty exciting.

What position/s do you play and what were you chosen for in NSW Team? Is it your favoured position?

My favourite position is an attacking mid but I like playing striker as well.

I am mostly playing in the AM for the NSW team which is really exciting.

Who was the most helpful throughout your accomplishments?

My parents and my coach Noddy (Naomi) who is always giving so much of her time to help the kids in her teams. There have been so many others as well but my parents and Noddy are the most helpful. Interestingly my Mum also made the NSW team when she was in Year 5 and 6.

What do you want to become in the future?

I would love to be picked in future NSW teams and maybe one day a Hockeyroo like Emily but this will take a lot of time and effort.

I just want to have fun 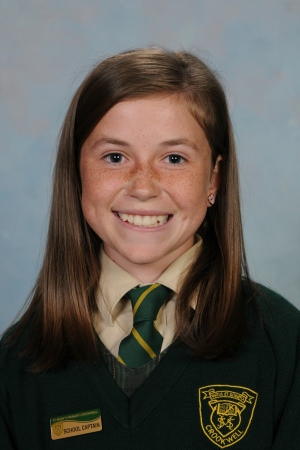 When did you start playing Hockey?

I began playing Hockey when I was five and loved it. It has become my life since then. I travel to Goulburn twice a week to train for my club team and my rep team.

I have played for the Goulburn U13s rep team for 2 years now, travelling to Taree and Parkes for State Championships.

During the summer I play indoor hockey for Goulburn.

Do you have an idol who inspires you?

Most successful sports stars have someone who inspires them and mine is Hockeyroo, Emily Chalker(nee Smith) I love that she is a striker because that is my position too. She is always chasing the ball and creating lots of opportunities for her team. I have also had some great help and advice from Kellie White and Glenn Turner. I really respect all the club and Rep coaches I have had as well. Every coach you have helps you to become a better player

What do you enjoy about Hockey?

Hockey allows me to have some awesome new experiences, like seeing a lot of NSW and Australia. I am a determined person and believe hard work and belief has got me where I am today. I set my goals and work hard each day to achieve them.

What position/s do you play? What were you chosen for in the NSW team and is it your favoured position?

I play a striker, up the front. My job is to score goals, set up the press in defence and put pressure on the opposition.

Striker is my favourite position because I like scoring goals and chasing down the ball.

Who was the most helpful throughout your accomplishments?

As mentioned above I owe a lot of my success to many coaches. My family are always supportive and have helped me get the funds I need to travel with Hockey.

What do you want to achieve in the future?

While this may be my biggest achievement so far I will continue to work hard to achieve my long term goals too. I want to make future NSW teams and to one day become another Hockeyroo from Crookwell NSW.

I have also been selected in the U13s girls NSW Lions team, and travel to Hobart during the October holidays for the National Championships.

The history behind the Feast of the Epiphany

While the hustle and bustle of Christmas ends for many people on Dec. 26, throughout Christian history Christmas lasts for twelve days – all the ... Read More