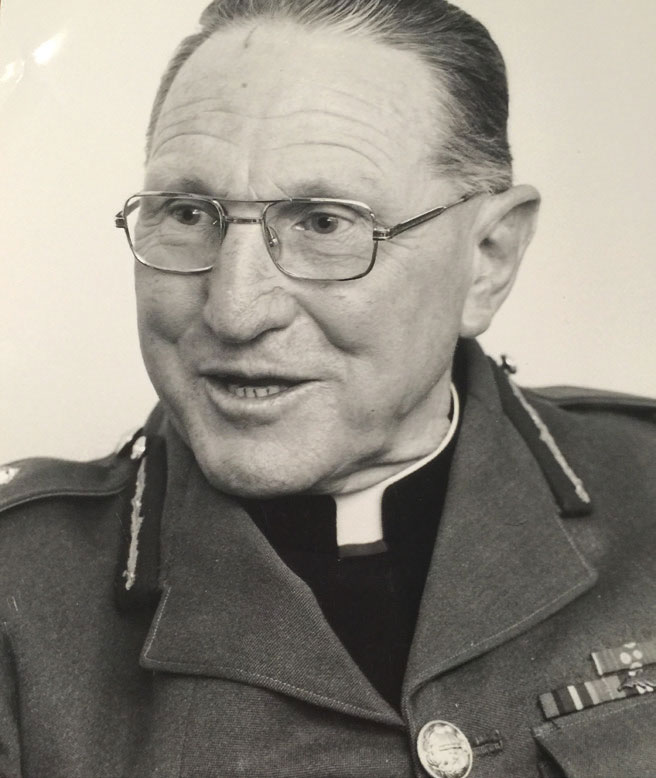 This year, Easter and ANZAC Day are in particularly close proximity. Chaplain ANTHONY DOYLE recounts the life of Australia’s first Catholic Military Bishop, a much-loved priest who devoted his life to Australian Servicemen and women.

Many readers of the Voice who were in their youth or early adulthood in the 90s will recall a kindly, distinguished elderly priest who seemed to appear at every youth and other Catholic event of those days.

Newcomers were introduced to him as retired Bishop Morgan and he was able to effortlessly move between the generations.

Office workers attending the Cathedral at midday would find the same man so reverently saying the mass that at times one felt as if they were an intruder rudely eavesdropping on an intimate conversation between the closest of friends.

What many of us did not then know was that the same man was also the legendary Padre Alo’ Morgan who had served with distinction for three years as a chaplain in the jungles of New Guinea and went on to become the first Bishop of the Military Ordinariate (Diocese).

Aloysius Morgan was born in Victoria in 1909 and his future vocation was prefigured as a six-year-old living on the Mornington Peninsula, when he saw a boat sail into Port Phillip Bay marked with the sign of the Cross. What he saw was a Hospital Ship returning with wounded servicemen from Gallipoli. Ordained in 1934, Fr Morgan served in rural Victoria and in Melbourne and when War broke out he volunteered to be an Army Chaplain and for the work that would indelibly mark the rest of his life.

In 1942, Australian soldiers were fighting desperate battles in Papua New Guinea and Fr Morgan was soon posted there. He later described his initiation to combat:

I remember my first experience of being a Catholic Priest with soldiers locked in combat with Japanese soldiers in the jungle mountain ranges of Wau-Salamaua area of New Guinea. As I set out to climb the first steep range that would bring me to the combat area I recalled Our Lord’s words

“I will be with you always…” [Matthew 28:20]. I became conscious that in God’s plan and providence, I was to be the instrument by which Our Lord would be with these soldiers during their first critical months in action by his Eucharistic Presence.

On another occasion, he met a group of soldiers at a river crossing that wanted to go to mass. There was nothing that could be improvised as an altar. Fr Alo’ realized that the bank was three feet above the shallow river and so he placed an altar cloth on the bank and said mass standing and kneeling in the river.

The young Padre had a deep affection for fellow chaplains, Catholic, Protestant and Jewish and a love for all the Diggers in his care later declaring that “I belonged to the whole community there (New Guinea). It wasn’t just the Catholic men.”

After the war, he returned to parish ministry but unsurprisingly remained in contact with many of the men that he served with and was in demand at unit reunions. He continued in the Army Reserve and later became the Catholic Chaplain-General spending time with a new generation of Diggers this time in Vietnam. In 1969, he was consecrated as the first bishop for the Australian military.

Upon his resignation at the end of 1984, Bishop Morgan was officially in retirement but in real­ity entered into a new ministry popping up at all manner of events and keeping in touch with a wide variety of veterans and many others that he had befriended. In 2008, the former youthful cricket-playing priest narrowly missed another century, dying at the age of 98.

Despite having borne onerous duties and received many honours, he remained steadfast and humble, focused on being a simple channel of God’s grace.

It was not my presence that was important [on the battlefields]

– it was the real presence of Our Lord during the Mass that was important. I was just the instrument – an ordained priest. Our Lord was using me to fulfil his promise – “I will be with them…”

In 1969, the newly consecrated Bishop spoke at a Commando Association Reunion. His words to the then middle-aged veterans apply equally to all the men and women who have nobly served their country:

[A]s an Army Chaplain, I believe that our deceased companions still live not only in our memories, but in truth and reality. I recall the words once spoken to me by Field Marshall Sir William Slim: “I believe” he told me

“that God is good to those who die in battle.” With these words of the Field Marshal in mind, I offer with you a prayer:

Lord God, Lover of men, we give you praise for all those whom we remember before you at this time.

Into your hands O Lord, we commend their spirits. Let the memory of their devotion be ever an example to us, that we may be taught to live by those who learned to die, and that at last we, being faithful unto death, may receive with them the crown of life.

May he, and they, Rest in Peace.

Many thanks to Denis Connor, Archdiocesan Archivist who sourced and made available Bishop Morgan’s personal letters, news articles, photographs and service medals for the use of this article.

On Wednesday April 17, at the Canberra Hospital, the Veteran’s Support Group conducted the annual Tribute to Veteran and Peacekeepers memorial service. Read More