Jessica rallies the troops to save Unit 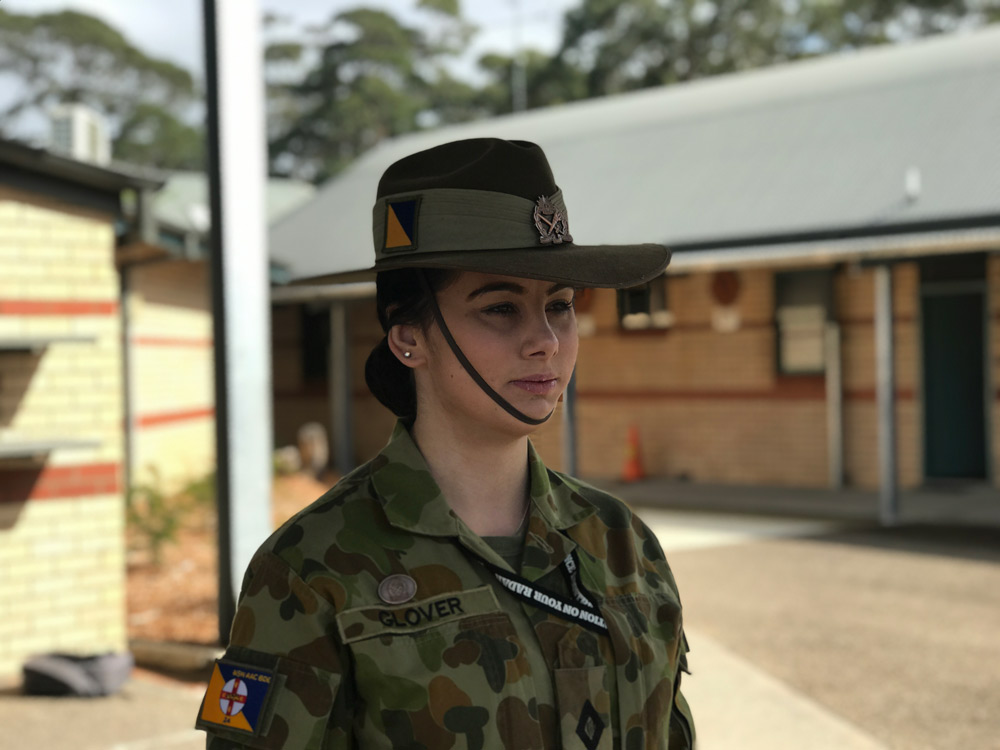 If the Australian Army Cadets movement was looking for a poster boy or girl to develop an advertising campaign around, they couldn’t do a lot better than Jessica Glover.

A few minutes with her and it’s obvious that her passion and zeal for cadets are the real thing. But if by some chance you weren’t convinced, her actions seal the deal.

She was recently awarded the Australian Defence Force Long Tan Leadership Award (Long Tan Award), and not for the first time. She is one of very few people to have received it twice.

“The first time I got it I was in Year 10, and then I got it again this year,” said the Year 12 Carroll College student.

The award recognises people in the community that demonstrate excellence in leadership and team work. Her efforts this year definitely exemplify that.

At the age of 16 going on 17, she literally rallied the troops to keep her cadet unit alive.

“All of the staff involved [in our cadet unit] finished up and they were contemplating shutting it down,” Jessica explained.

“I was determined not to let that happen so I stepped up and took on most of the adult staff responsibilities to keep it going.”

Jessica’s recognition follows her lengthy commitment to Cadets. Joining in Year 7, she had already risen to the rank of Cadet Under Officer by the age of 15.

Her efforts have not only been rewarded with the Long Tan Award, but also with the still-functioning 51 member strong unit. Not that there haven’t been difficulties. Without qualified adult staff they haven’t been able to do weekend activities. A few adult staff have now completed the basic course so they are qualified for Tuesday night parades. Jessica hopes before long they will be able to run bivouacs.

It’s been a huge undertaking for a student, especially when trying to juggle HSC studies and other commitments although Jessica confesses her schoolwork didn’t receive much of her focus at times.

“It was difficult at times but I think cadets is something that if you are really passionate about it nothing else matters. I live and breathe cadets and school was often second,” she said, before apologising to her mum sitting proudly beside her.

But I don’t think her mum minds.

Jessica has already lined up a job for next year, working for a local law firm. That won’t be the end of her involvement with cadets though and she has already mapped out her future involvement.

Returning as an adult volunteer

Jessica will be taking on the position of assistant regional CUO for NSW in 2019. In that role she will be helping to run army cadets across NSW and ACT.

She hopes more teachers and adult volunteers will come forward and help the unit, which is community-based rather than school-based.

Her near evangelical passion for cadets is a result of what she says she gained from it.

“It’s given me a lot of confidence and resilience,” she enthused.

“I was a really quiet kid but in cadets I have to public speak and address people all the time.

“You make such good friends… I’ve made friends all over Australia and the friendships remain even if you only see them for a week at a time.

“Cadets is just such a good youth development organisation. It teaches such amazing skills and gives you so many opportunities to succeed.

“I really think every school kid should have a crack at cadets. It’s one of the best things you’ll ever do.”

There you go advertising executives… the ad copy writes itself.