L’Arche offers a hub to connect 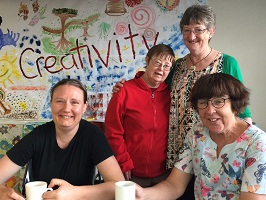 In a spacious room under the L’Arche Genesaret offices in Phillip, members of the community’s women’s group are enjoying a cuppa with support workers on the comfy sofas before applying themselves to their latest artistic project – a “kaleidoscope of colour” called Wings.

The word “creativity”, splashed across the wall behind them, sets the scene for their work on the mural, to be mounted on a large black canvas.

The women, some of whom live in L’Arche’s supported independent living houses and work part-time jobs for businesses such as GG’s Flowers in Deakin and in the kitchens of Calvary John James Hospital, have gathered in the space known as The Hub.

For the past nine months, The Hub has provided a dedicated place for the people with intellectual disabilities to form connections with people from the broader community – which is what L’Arche (French for “the ark”) is all about.

L’Arche Canberra’s interim CEO, Kim Sinclair, said a function of The Hub was to allow these “core members” and others, with or without a disability, to intermingle, typically through activities such as art, drama and planned yoga and fitness classes.

This social enterprise is yet another way L’Arche is making a difference to the lives of people with intellectual disabilities.

To mark their 40th anniversary in Australia, L’Arche is holding a dinner at the Southern Cross Club Woden on March 9 with John Coleman attending as the guest singer.

Also this year, the organisation will open its fifth house in Canberra, in Calwell as part of the Corpus Christi Parish, South Tuggeranong.

Each house provides a family-home environment in which four or five core members, with the help of live-in and live-out assistants, can live independently and interact with the community in their daily lives.

Ms Sinclair said the homes provided opportunities “over and above the support under the NDIS [National Disability Insurance Scheme]” and gave “core members the opportunity to make mutual friendships across the wider community”.

She said L’Arche was hoping to set up another three households in the near future.

– To buy tickets for the anniversary dinner or to help with sponsorship or fundraising call (02) 6282 9066 or email canberra@larche.org.au
– For more information about The Hub and its activities, go to www.thehubinphillip.org.au

Merici hones in on the homeless

The night was cold, the wind was biting, but that didn't deter over 80 students and staff from Canberra's Merici College roughing it under the ... Read More