Liturgists say online Mass is fine, but no substitute for the real thing 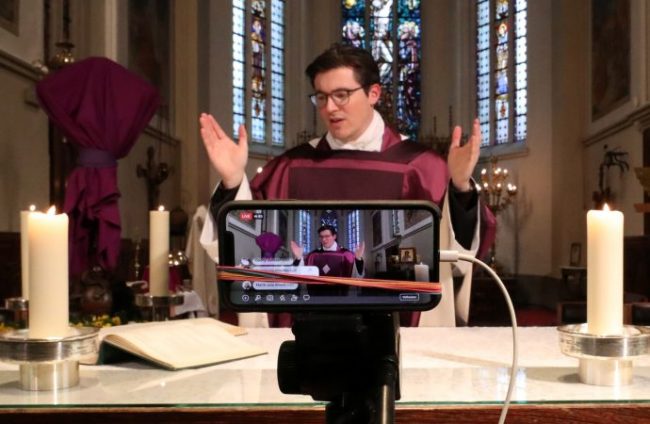 This year’s Holy Week celebrations resulted in a major spike of new viewers tuning in to watch Vatican liturgies – an increase from 1.5 million online viewers last year to 5.5 million this year – and a trend matched by ordinary parishes throughout the world forced to go virtual during the COVID-19 pandemic.

Yet as technology has allowed many Catholic churches to transition to a new schedule of online rosary groups, live-streamed adoration, and televised Masses, parishioners and priests alike have struggled to adjust to the new normal.

For Catholics, who are used to the physical realities of participation in the Mass – from the kneeling to the sign of peace to, most importantly, the reception of Holy Communion – it’s been an abrupt change and theologians have differing opinions on whether, to use the language of Vatican II, one can engage in “full, conscious, and active participation” in a Mass if they are watching via television or online.

“If you turn to a TV Mass with the same attitude that you binge-watch the latest season of [Netflix series] The Crown, then this is not a real act of participation,” said Timothy O’Malley, the academic director at the University of Notre Dame’s Center for Liturgy. “Of course if you attend Mass as a spectator, hoping to hear some nice music, to see some of your friends, this is not the ideal sense of participation either.”

“The kind of ‘viewing’ Mass on TV that is participation involves embodied acts of worship,” he said. “At Mass, we must stand and sit, to use our voices in the praise of God, to kneel before the living presence of Christ. At home, we can and should do this. We can stand and sing the chant or opening hymn. We can sit attentively and listen to the word of God.”

“Now, we are not in the presence of the Blessed Sacrament strictly speaking,” O’Malley continued. “And yet, we can still kneel. My wife and I have taken up to kneeling not before the TV but before a crucifix in our home. We kneel before the presence of the crucified and risen Lord,” adding that the real work of active participation is “always attunement of our inner and outer lives.”

“People entering into an online Mass in faith and devotion participate in that Mass, even if the specifics of their bodily participation differ from offline liturgical participation in a brick-and-mortar sanctuary,” said Berger.

“It is worth remembering in this context that being present in a brick-and-mortar sanctuary for Mass also does not guarantee active participation,” she said.  “One might, after all, merely be breathing the same air as the congregation, while one’s heart and mind are somewhere totally different.”

“When laypeople view an online Mass, they actually are not participating in Mass. And this is not just a problem for the people, but also for the Mass itself,” he advised. “According to Catholic theology of liturgy, the people are celebrating together with the priest. If the people cannot be there, it is a Mass that is lacking something.” The General Instruction of the Roman Missal, issued in 1969, says that “Mass should not be celebrated without a minister or at least one of the faithful, except for a just and reasonable cause.” This doesn’t mean that the Mass would be less valid.

READ ALSO:  ACN concerned about priests and religious in danger in many parts of the world

Faggioli sought to make a distinction between an ordinary Sunday Mass being celebrated online and that of a Mass for the canonization of a saint in Rome or the funeral Mass for a pope, saying there are times when the exceptional nature of an event makes tuning in online or via television the only viable substitute for participation.

Yet he cautioned the recent abrupt shift to online Masses should not result in complacency about how one thinks about the Mass.

“My impression is that in many cases there has been a huge effort in the transition to the online, but not to an understanding of what it means,” he continued. “It is the same for me as a professor now teaching online: there is a liturgical dimension of the physical classroom that is difficult to translate to the virtual classroom,”

Faggioli warned there is a growing problem that many people believe that liturgy equals Mass. Lay Catholics, he said, need to be better catechized about what they are capable of doing on their own at home through domestic liturgies and using sacred scripture that can take place without the aid of a priest.

Yet for O’Malley, while Mass without the full participation is different, it’s providing its own source of consolation right now through adjusted rituals.

“As St. Augustine reminds us it is not enough to sing praise to God in psalms, without also letting our lives become a hymn of praise,” he continued. “During this pandemic, there is ample opportunity for this full participation of each and every Christian in becoming a hymn of praise. I suspect this is why so many of us are finding even the viewing of Mass on television necessary for dealing with the sadness, the desolation, the loneliness, and the fear that are elicited through this pandemic.”

While it’s been nearly 75 years since the first televised Mass took place – a Midnight Mass broadcast from Paris’ Notre Dame Cathedral at Christmas in 1948 – the debate over using such a medium has continued since that time.

“Initial responses to televised Masses from theologians … were decidedly negative and dismissive,” said Berger. “In part, they relied on now-outdated ways of theorizing what it meant to watch something on TV in their response, understanding such watching as merely passive and non-participatory.”

“In the 14th century … few would receive the Eucharist weekly but would ‘receive’ the Eucharist through ocular communion,” meaning “they would gaze upon the host, often with accompanying prayers. This was understood as a ‘real’ albeit spiritual communion.”

While saying that Catholics shouldn’t necessarily go back to the 14th century, O’Malley said that it’s important to remember that even without reception “the faithful are not cut off from the fruits of Eucharistic communion.”

“Spiritual communion is linked to eating and drinking Christ’s Body and Blood,” O’Malley said. “Right now, when we can’t do the latter, the former becomes a way to receive the fruits of the Mass, while also preparing ourselves on that glorious day when we can once again enjoy the supper of the Lamb.”

Catholic dioceses in the Metro Manila area of the Philippines have suspended public Masses for three weeks amid a rise in COVID-19 infections. The news ... Read More