Many rewards in Victor’s lifetime of service Victor Dunn with one of his grandsons

For New Zealanders Kaye and Victor Dunn life has in many ways come full circle.

They met on a Sydney-to-Canberra tourist bus in 1966 and fitted in stints in London, Perth and Forbes in country NSW before moving to Canberra more than a decade ago and, now, into retirement in the national capital.

“The invitation to become the Chancellor was certainly a surprise – a pleasant one,” Victor said. “It is such a grand title. In terms of the role it was, in the words of the Vicar General, Fr Tony Percy, the ‘grand company secretary’.

“The special aspect of being Chancellor was the opportunity to engage on a personal level with Archbishop Christopher and Fr Tony and feel that my contribution was valued.”

The Dunns lived in Forbes for nearly 20 years where Victor was Director of Schools in the Diocese of Wilcannia-Forbes which makes up more than half of NSW. 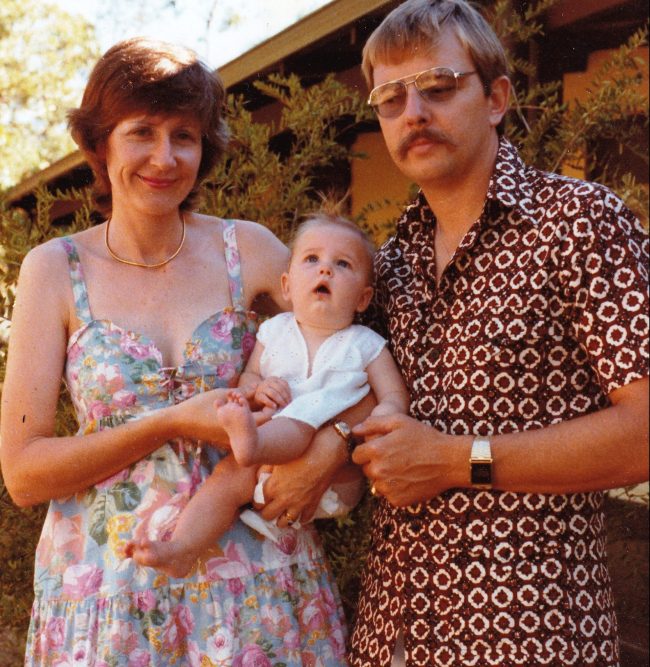 Victor and Keye with their wew baby in Perth

“It was a most rewarding experience,” he said. “The people with whom I worked were highly motivated, innovative and committed. The young teachers who took up the challenge of teaching in remote locations such as Bourke, Brewarrina and Wilcannia – at first with some trepidation – engaged with their communities and often stayed for three or four years.”

“Principals such as Sr Margaret McGrath, who worked in Wilcannia for many years, and teacher aides such as Buddy and Stevie, who were so talented and committed to the children in their care.

“A particular highlight for me was the professional and support staff who worked in the Catholic Education Office.” Working at the light table in Perth Catholic Education, 1981

Despite being a small operation diocese, Wilcannia-Forbes won two national awards for literacy, one for mathematics and the National Award for Affirmative Action and Equal Employment Opportunity for Women.

“I am particularly proud of the formation programs provided by Br Bill Tarrant, Sr Anna Warlow and Mrs Mary Kenyon for staff to take up their ministry and assume the responsibility as educators in a Catholic school,” Victor said.

“Having been brought up in rural New Zealand, spending much of my youth in shearing sheds and cow sheds, it wasn’t difficult to fit back into the rural environment.

“I grew to love the country and the driving, nine hours to Broken Hill, which provided plenty of time for prayer and spiritual reflection.

“I also made sure I stopped over and visited priests such as Kevin Murphy in Nyngan for a great lunch or dinner.” Victor and Kaye on a trip down the Swan River.

Victor said he had been privileged to work with “some very special men in Bishops Doug Warren, Barry Collins and Chris Toohey.

“Doug Warren’s insight that we must learn to trust in God has stayed with me.

“So I feel quite comfortable with where the church is at knowing that God has things in hand. My role is to use my gifts in living out the Gospel.”

Victor described the thought of retiring as “quite alien having being in paid employment since the age of 15”.

However, he is looking forward to stepping down.

“There are a number of digital photo albums and history activities that I need to complete, gardening, volunteer activities and, as with many grandparents, grandsons to keep me fully engaged.”