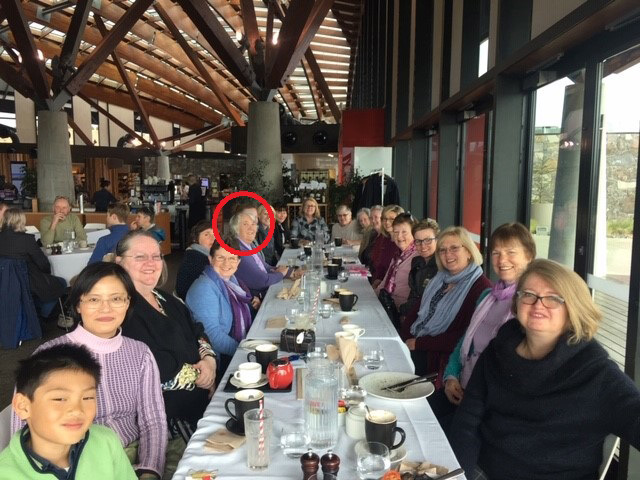 A long-term parish secretary who retired from that position earlier last year, Mary was farewelled at a special morning tea after Mass at St Vincent de Paul church, Aranda on December 2.

Mary began her time as a volunteer in St Vincent de Paul Parish, Aranda “back in Fr Bateman’s day” (1984-1982) with occasional typing and collating of items for the bulletin.

These were then collected and typed by Nancy Anderson and printed by Lucy Kolek on the school gestetner.

Mary began recording the planned giving envelopes when Michelle Roberts went to help her recently retired husband in a new business in 1987.

In those days the envelope sets were provided quarterly.

She took over typing the bulletin from Nancy when she became ill (around 1988) and continued until Denise Stubbs was employed in the Parish Office by Fr Maher.

About the same time the Archdiocese entered into an agreement with the Broken Bay diocese to use their Parish Data System.

Mary I assisted in entering all the Parish records and registers and when later the parish began MYOB for financial records, set up by Paul Hemsley, she helped with the monthly entry of purchases and receipts.  Previously the records had been kept by Anne McCarthy.

Mary filled in for Denise when she went overseas but unfortunately she became ill while away in Wales and couldn’t come back to the office.

It was in September 1998 that Mary became the official secretary but she emphasises that there have been a lot of people involved in keeping the parish running throughout that time.

The parish wishes Mary all the very best in her retirement and thanks her for her many years of untiring service.

Looking after the people who look after us

The position of ACT Emergency Service Agency Chaplain is now vacant and applicants are being asked to come forward. Read More