“The ode deals with remembrance, we remember and Christ remembered at the Last Supper,” the Archdiocesan Vicar General said.

“The Last Post deals with death, the reality of death, and then there’s a minute’s silence which I suppose honours the silence of Holy Saturday, then the Reveille (bugle call) which deals with the Resurrection, so they’re profoundly Christian symbols and are fitting for the ANZAC moment.” 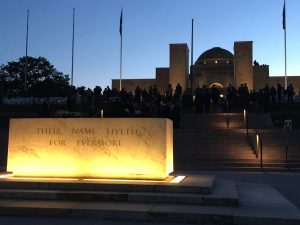 Bishop Max Davis AM, Military Ordinariate of Australia, was the principal celebrant at the Mass. He was joined by Archbishop Christopher Prowse and Archbishop Adolfo Tito Yllana (Papal Nuncio to Australia), while Bishop Pat Power and Msgr Peter O’Keefe AM concelebrated.

The Ensign Party on the day was made up of Officer Cadets and Midshipmen from the Australian Defence Force Academy, who actively played a part in the Last Post, the Reveille and the retiring of the colours.

Mary Help of Christians, Patroness of the Diocese of the Australian Military Services. Pray for us!

Remember, O most loving Virgin Mary,
that never was it known that anyone
who fled to your protection,
implored your help,
or sought your intercession was left unaided.
Inspired with this confidence, we turn to you,
O Virgin of virgin’s, our Mother.
To you we come, before you we stand,
sinful and sorrowful.
O Mother of the Word Incarnate,
Do not despise our petitions,
But in your mercy hear us and answer us.
Amen. 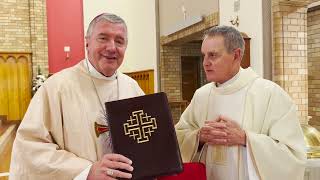 The final Synod report from the Archdiocese of Canberra and Goulburn and the Military Ordinariate of Australia – part of a national response that will ... Read More