Staff, students and some of the many contributors who made the new Multisport Court at St Mary’s, Crookwell a reality. Photo Chris Gordon.

For some schools, the opening of a new sports facility may not seem a very big deal. For St Mary’s Crookwell, the occasion was a day for celebration.

The newly opened multipurpose sports court will offer facilities that not only weren’t previously available at the school, but weren’t available in the town of Crookwell or the surrounding district.

Parishioners, staff and councillors from the Upper Lachlan Shire Council, members of the community and members of Catholic Education for Canberra and Goulburn joined with staff and students to celebrate the opening of the new facility.

“Our Multipurpose Sports Court provides competition sized basketball, netball and tennis courts, along with a practice wall and handball courts,” St Mary’s Principal Sarah Lowe said in her address at the opening.

“This facility will be utilised every day by St Mary’s Primary School and will also be offered as a venue for local basketball and netball competitions, something that is not currently offered in our district.”

The new facility stands on the site of old parish tennis courts that had fallen into disrepair.

When approached with the idea of using the space for the new facility, Administrator of the St Mary’s Parish, Crookwell, Fr Dermid McDermott and the Parish Pastoral Council supported the proposal enthusiastically.

Next a NSW government grant was sought and approved.

The Grant, secured by Member for Goulburn, Wendy Tuckerman and her predecessor Pru Goward, added $108,400 to the kitty that also included a $16,500 contribution from St Mary’s P&F Association and $10,200 from the school. 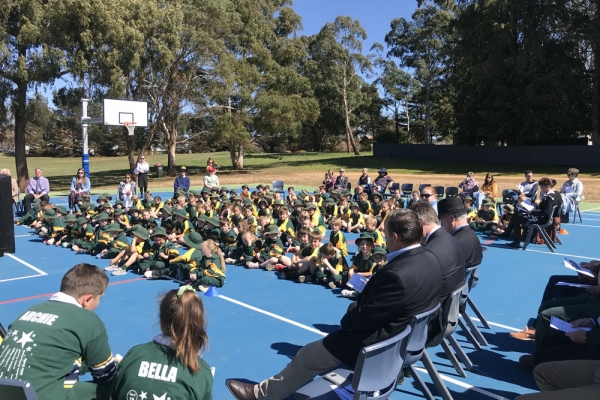 The official opening  included an acknowledgement of country, an opening prayer read by school captains Bella and Archie, a reading from Religious Education Coordinator Therese Skelly, a psalm read by Assistant Principal Sally Croker, prayers of the faithful read by Year 6 leaders, and a Prayer of Blessing from Fr Dermid McDermott.

Director of Catholic Education for the Archdiocese, Mr Ross Fox, echoed Mrs Lowe’s vote of thanks and appreciation to the many groups and individuals who worked towards the realisation of this project. State Member for Goulburn, Mrs Wendy Tuckerman, endorsed Mr Fox’s comments and added that it was particularly pleasing that the government grant had contributed to such a great community resource that many would benefit from for years to come.

To help “bug test” the facility and make sure it was fit for purpose, Mr Fox joined with students in a quick game of basketball.

Mrs Lowe thanked the long list of contributors and supporters involved in the project, including:

READ ALSO:  Mass for the repose of the soul of Pope Benedict

“The opening of this court today marks phase one of the development of this site,” Mrs Lowe concluded.

“There are plans for a toilet block, and eventually a roof when funds allow.”

NEWER POSTCatholic leaders appeal for help after Jesuit school in India attacked
OLDER POSTParish Secretaries; on the front line of our churches