‘One of our own’: Catholic leaders welcome Amy Coney Barrett to Supreme Court Judge Amy Coney Barrett holds her hand on the Bible as she is sworn in as an associate justice of the U.S. Supreme Court by Supreme Court Justice Clarence Thomas at the White House in Washington Oct. 26, 2020. (CNS photo/Tom Brenner, Reuters)

Catholic bishops, academics, and policy experts hailed the confirmation of Justice Amy Coney Barrett to the Supreme Court on October 26. Barrett was confirmed Monday evening in a senate vote that mostly divided along party lines.

Archbishop Gregory Aymond of New Orleans hailed Barrett, a Louisiana native, as “one of our own” on Monday evening. “We pray that the Holy Spirit will continue to lead her and guide her in her service to our country.”

Bishop Richard Stika of Knoxville, Tennessee, also added his congratulations to Barrett via Twitter, as did Bishop Joseph Strickland of Tyler, Texas.

Barrett’s arrival at the Supreme Court was also welcomed by her former colleagues at the University of Notre Dame, where she was both a law student and professor for several years.

“Recognized by experts from across the spectrum of judicial philosophies as a superb legal scholar and judge, she is an esteemed colleague and a teacher revered by her students. Justice Barrett becomes the first alumna of Notre Dame Law School and the first Notre Dame faculty member to be so honored,” Jenkins said.

“We join her family and friends in celebrating this momentous achievement, and we assure Justice Barrett and all her colleagues on the nation’s highest court of our continued prayers in their work of administering justice and upholding the Constitution.”

Jenkins’ sentiment was echoed by G. Marcus Cole, the Joseph A. Matson Dean and a professor of law at Notre Dame Law school. Cole said he was “immensely proud of our alumna, colleague, and friend on this momentous occasion.”

“For more than two decades, we have been blessed by her brilliant scholarship, her devoted teaching, and her thoughtful, open-minded approach to legal questions,” said Cole. He referred to Barrett as not only a “brilliant” scholar, but also as someone who is “exemplary” kind and generous.

“While we will miss her presence on our campus and in our community, we look forward to witnessing these qualities as she serves on our nation’s highest court,” said Cole. 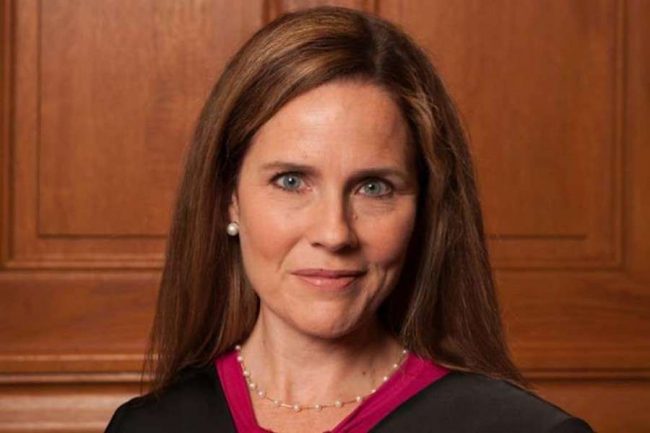 During her confirmation process, Barrett became a target for criticism by both media commentators and Democratic lawmakers, with multiple stories focusing on her religious beliefs and family.

Princeton professor Dr. Robert George, referencing the controversy over Barrett’s reported affiliation with the charismatic group People of Praise, posted a picture of himself and the now-justice on his Twitter account following her confirmation.

“With my favorite Handmaiden of the Law,” he said.

“Justice Barrett clearly demonstrated she has the qualities, knowledge, and skill needed to be a fair and independent Justice for every American. Senators that voted to confirm Justice Barrett are to be commended for focusing on her eminent qualifications and commitment to fairness and the rule of law, rather than the ugly anti-Catholic attacks that threatened to tarnish this process,” he said.

Dr. Grazie Christie, a policy advisor for The Catholic Association, called Barrett’s confirmation “great news for all Americans who prefer a fair and independent judiciary to an activist one.”

“Judge Barrett has demonstrated that she will equally apply the law to everyone who comes before her and faithfully interpret the Constitution as written. Her profound knowledge of the law is only matched by her exemplary character,” she said.

Christie called Barrett a “role model for women and girls who aspire to reach the highest levels of accomplishment.”

After focusing last year on seeing reality and conveying it to others, Pope Francis in his 2022 Message for the World Communications Day emphasized the quality of listening, which he ... Read More