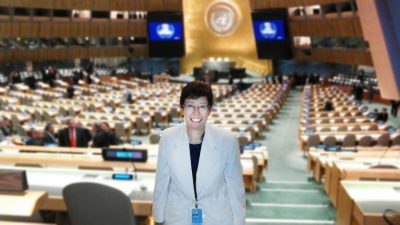 The under-secretary of the Section for Relations with States, Dr Francesca Di Giovanni, at the United Nations
Photo: Vatican News

Pope Francis has broken a Vatican glass ceiling by appointing the first female manager at the Holy See’s Secretariat of State.

Dr Francesca Di Giovanni has been given a senior diplomatic role as the new under-secretary at the Section for Relations with States and will have responsibility for working with international bodies such as the United Nations. Her role makes her one of two deputy foreign ministers at the Holy See’s ministry for foreign affairs, which is led by Archbishop Paul Gallagher.

Dr Di Giovanni, 66, is an official at the Secretariat of State where she has worked across with multi-national bodies on migrants and refugees, international humanitarian law, communications, private international law, the status of women, intellectual property, and tourism.

“It’s the first time a woman has had a managerial position in the Secretariat of State,” she told Vatican News. “The Holy Father has made an unprecedented decision, certainly, which, beyond myself personally, represents an indication of attention towards women. But the responsibility is connected to the job, rather than to the fact of being a woman”.

Throughout his pontificate, the Pope has named a small number of women to senior positions in the Vatican, where the vast majority of leadership roles are held by male clerics.

He chose the first female director of the Vatican Museums, the first woman consulters to the Congregation for the Doctrine of the Faith, and the Synod of Bishops’ secretariat. He’s also appointed the first women members to the Vatican body overseeing religious life.

Elsewhere, he’s appointed two female undersecretaries at the Dicastery for Laity, Family and Life, a woman undersecretary at the religious life department and the first female deputy director of the Holy See Press Office, Paloma Garcia Ovejero – although she resigned her position at the end of last year. Another woman, Cristiane Murray, was chosen as her replacement.

The Pope has also made provisions for those who are not priests to hold one of the top two positions in some Vatican departments, of prefect or secretary.

Nevertheless, being a cleric remains the traditional prerequisite for holding a leadership position in the Holy See hierarchy, with reformers arguing that this will remain the case until priesthood is de-linked from holding positions of power.

“I cannot fail to recall the words of the Holy Father in his homily on 1 January, in which he presented, we could say, a ‘tribute’ to the role of women, saying that women are givers and mediators of peace and should be fully included in decision-making processes. Because when women can share their gifts, the world finds itself more united, more peaceful,” said Dr Di Giovanni.

“I would like to be able to contribute to the realisation of the Holy Father’s vision, with my other colleagues who work in this area of the Secretariat of State, but also with other women, and there are many of them, who are working to build fraternity in this international dimension too.”

This article was first published in The Tablet

No decision to close St Bede’s