Pope Francis: Ask God for the strength to love your enemies 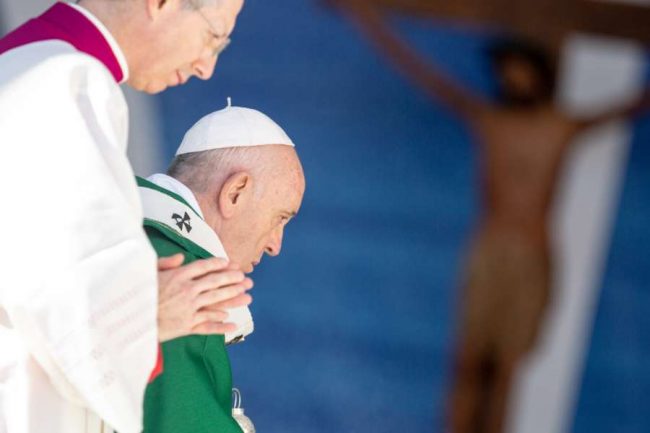 “Ask God for the strength to love. Say to Him: ‘Lord, help me to love, teach me to forgive. I cannot do it alone, I need you.’ … We need to pray more frequently for the grace to live the essence of the Gospel, to be truly Christian,” the pope said.

Pope Francis offered Mass in Bari for the conclusion of the “Mediterranean, Frontier of Peace” meeting of bishops from 19 Mediterranean countries, which took place Feb. 19-23. An estimated 40,000 people attended the pope’s Sunday Mass in Bari’s Piazza Libertà.

In his homily, the pope said that Christ on the cross perfectly lived out God’s command to Moses in the Book of Leviticus chapter 19: “Be holy, for I, the Lord, your God, am holy.”

“He did not point a finger at those who wrongfully condemned him and put him to a cruel death, but opened his arms to them on the cross. And he forgave those who drove the nails into his wrists,” Francis said. “If we want to be disciples of Christ, if we want to call ourselves Christians, this is the only way.”

“This is the revolution of Jesus, the greatest revolution in history: from hating our enemy to loving our enemy; from the cult of complaint to the culture of gift. If we belong to Jesus, this is the road we are called to take,” Pope Francis said.

The only kind of “Christian extremism” is “the extremism of love,” he said.

Pope Francis said that there is no getting around the Lord’s command to “love your enemies” because Jesus is “direct and clear … His words are deliberate and precise.”

The pope said that some people may think that they cannot “survive in this world” if they love and forgive in a world where “the logic of power prevails and people seem to be concerned only with themselves.”

“As Saint Paul told us in the second reading: ‘Let no one deceive himself… For the wisdom of this world is folly with God.’ God sees what we cannot see. He knows how to win. He knows that evil can only be conquered by goodness,” he said.

He added: “Jesus, with his limitless love, raises the bar of our humanity.”

“Today let us choose love, whatever the cost, even if it means going against the tide. Let us not yield to the thinking of this world, or content ourselves with half measures,” Pope Francis said. “Then we will be true Christians and our world will be more human.”

Carmel shows no signs of slowing down

BRADDON’S Carmel Toohey is showing no signs of slowing down. A long-time volunteer of St Vincent de Paul Society and pioneer of the Canberra Vinnies ... Read More

NEWER POSTA teabag cluster minus the leaves
OLDER POSTArchbishop Coleridge in Rome for meetings on seal of confession, Plenary Council and Cardinal Pell