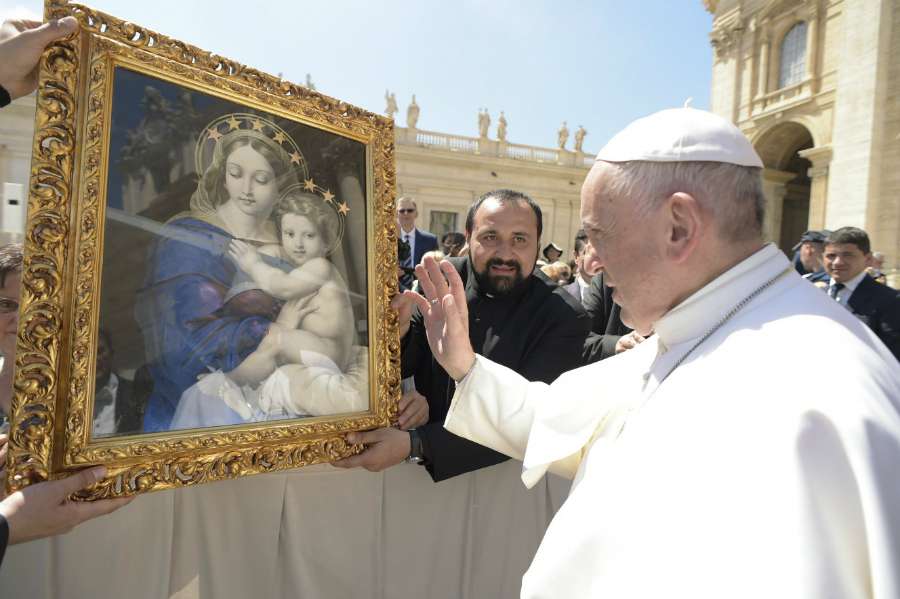 VATICAN CITY: Pope Francis announced Thursday that he is giving 6,000 blessed rosaries to Catholic communities in Syria as a sign of his closeness on the Marian Feast of the Assumption.

“Prayer made with faith is powerful! We continue to pray the rosary for peace in the Middle East and in the whole world,” Pope Francis said Aug. 15 in his Angelus message for the Assumption of Mary.

The pope blessed the rosaries made by the Catholic charity Aid to the Church in Need, and said that the Syrian families that lost someone because of the war are close to his heart.

“The Feast of the Assumption of Mary is a call for everyone, especially for those who are afflicted by doubts and sadness,” Pope Francis said. “Today we look at Mary and we see the goal. We see that a creature was assumed to the glory of Jesus, the Risen Christ.”

The Feast of the Assumption, commemorating the end of Mary’s earthly life and assumption into heaven, is a major feast day and a public holiday in many countries. In most countries, including the United States, it is a Holy Day of Obligation, and Catholics are required to attend Mass.

“Mary is assumed in heaven; small and humble, she receives the highest glory first. She, who is a human creature, one of us, reaches eternity in soul and body. And she awaits us there, like a mother waiting for her children to return home,” Francis said.

“Every time we take the rosary into our hands and pray with it, we take a step towards the great goal of life,” he said.

Pope Francis said that Mary exalts in the greatness in the Lord and invites everyone to raise their eyes to the great things that the Lord accomplished in her.

“Mary shows us that if we want our life to be happy, God must be placed first, because he alone is great,” he said.

Mary, as every mother, wants the best for her children, the pope explained. He said that Mary tells each person: “You are precious in the eyes of God; you are not made for the small fulfillment of the world, but for the great joys of heaven.”

“Let us be attracted by true beauty, let us not be sucked into the smallness of life, but choose the greatness of heaven,” Pope Francis said.