Pope thanks Benedict XVI for his continuing service 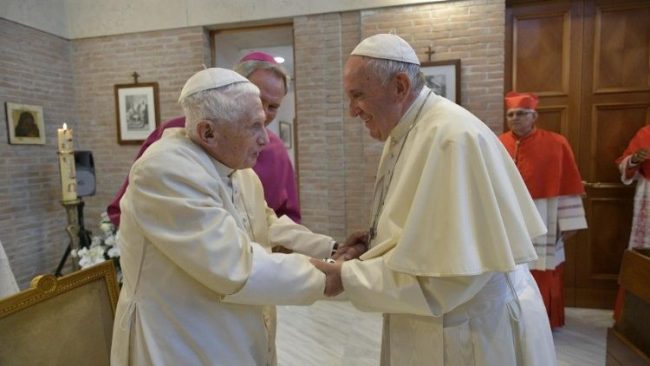 ROME (Vatican News) – Pope Francis has marked an anniversary “that touches the hearts of us all: 70 years ago, Pope Benedict was ordained a priest!”

Addressing pilgrims gathered in St Peter’s Square for the Angelus prayer on the Solemnity of Saints Peter and Paul, the patron saints of the city of Rome, the Pope said: “To you, Benedict, dear father and brother, goes our affection, our gratitude and our closeness. “

He told those present that the Pope Emeritus lives in a monastery, “a place intended to house the contemplative communities here in the Vatican, so that they could pray for the Church”.

He is now the contemplative of the Vatican, the Pope continued, who spends his life praying for the Church and for the diocese of Rome, of which he is bishop emeritus.

Day of Prayer and Reflection for Lebanon

Pope Francis also recalled that on 1 July a special day of prayer and reflection for Lebanon would take place in the Vatican.

He reiterated his invitation to all to join spiritually in prayer so “that Lebanon may recover from the serious crisis it is going through and show the world once again its face of peace and hope”.

Advent is a time of joy-filled waiting: Pope Francis

VATICAN CITY: As the Advent season begins, it is a good time to reflect on the Christian call to joyful expectancy, finding hope and consolation ... Read More