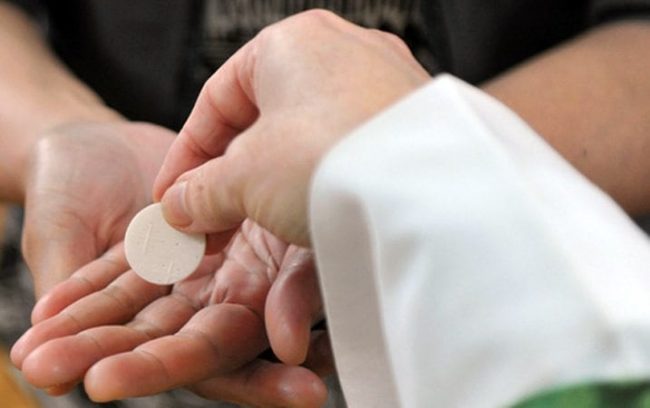 Many dioceses have issued guidelines indicating the Blessed Sacrament should be distributed in the hand as a preventive measure, but it’s unclear that it’s a safer practice — and making an act of spiritual Communion is another alternative.
Edward Pentin

VATICAN CITY — As dioceses issue, various directives on how parishes should handle the coronavirus, one in particular — that the faithful receive Holy Communion in the hand and not on the tongue for hygiene reasons — is causing much debate.

Across Europe and the United States, bishops have especially issued guidelines suggesting the Blessed Sacrament be distributed in the hand as well as instructing clergy to cease ministering the Precious Blood from the chalice if both species are commonly provided.

Before Italy’s bishops issued an interdict suspending all public Masses in the country on March 8, Milan was one of the first metropolitan dioceses to urge the practice. The vicar general of the archdiocese, Msgr. Franco Agnesi, suggested on Feb. 22 that Holy Communion “may be distributed on the hand, according to current liturgical norms.”

Other dioceses in northern Italy, the region of so-called “red zones,” where most deaths and cases of infection have been recorded, had also issued similar instructions, along with various other hygiene measures on how to prevent infection.

The Church in Italy is following government decrees to try to halt the spread of the virus, which, according to the World Health Organization, is spreading quickly across the globe and has a mortality rate considerably higher than seasonal flu (3.4% compared to 0.1%).

On Monday, Prime Minister Giuseppe Conti of Italy put the entire country on lockdown in order to stop the spread of the virus.

In the United States, where so far 617 cases and 22 deaths have been recorded, the bishops’ conference has yet to issue guidelines but has left that task to dioceses, which have followed suit with similar preventive measures.