Richard on his 100th birthday with a letter from Prime Minister Scott Morrison.

Richard Rudowski says staying healthy and fit has contributed to his longevity.

The South Tuggeranong parishioner should know. He celebrated his 100th birthday on January 23.

“I played a lot of sports when I was younger and didn’t drink alcohol or smoke,” he said.

Richard grew up in Poland the elder of two boys, and enjoyed snow skiing, skating and bike riding.

In 1941 during World War II, he was sent to a concentration camp as a prisoner of war. He was moved between Auschwitz, Neuengamme and Ravensbruck until the end of the war in 1945.

“It was very very hard but I survived and escaped and I was waiting to get out so I could get a good job and have a good future,” he said.

He met wife Wilma in Germany and after their first daughter was born they moved to Australia. 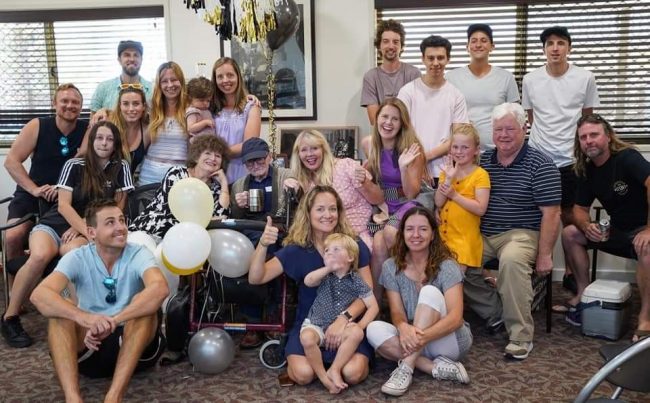 Richard celebrating with his family on his 100th birthday.

At first they had to learn to speak English, which Richard said wasn’t easy.

“I started with an average job with a pick and shovel repairing holes in the road because my English wasn’t very good” he said.

“English was very hard to learn but I knew that I had to keep practising as much as I could.”

Richard and Wilma had two more daughters who were both born in Canberra. Wilma died in 2003. Wilma and Richard in Sydney.

Richard worked for 31 years as a mineralogist at the Australian National University. One of the many highlights was being part of a team that analysed early samples brought back from the moon by the Apollo missions.

“People say they liked their work, but I loved my work,” he said.

“I had my laboratory and my assistants, but as I got older I had to give it up because the work required microscopes and my vision started to go.”

His name is published in a number of scientific papers.

The resilient and upbeat great-grandfather lives at a residential care home in Canberra’s south, and enjoys spending time with his family that continues to grow.

His 100th birthday, celebrated with his family, was marked with a birthday cake and congratulatory cards from the Queen and Prime Minister Scott Morrison.

There was no doubting the spirit at St Thomas’s last Sunday, a chilly day marking an early start to winter. For the first time in ... Read More

NEWER POSTTime to make a habit of forgiveness
OLDER POSTHomicide