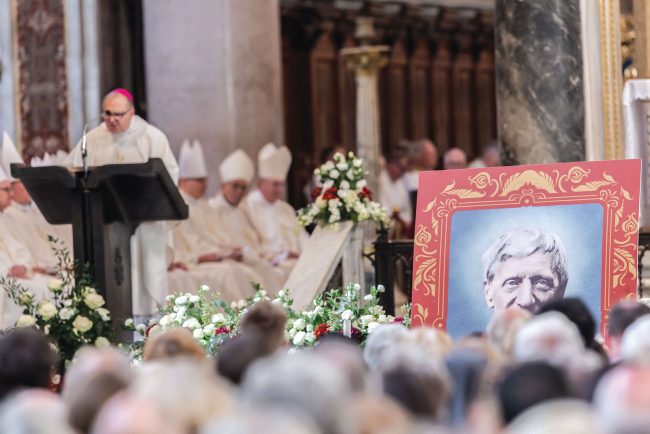 A doctor friend was asked to treat the historian Manning Clark for an illness. Clark asked him if he knew much about John Henry Newman (1801-1890). My friend pleaded ignorance. He inquired why Clark was interested. Clark responded, “I think he is the Church’s greatest theologian.”

The story undoubtedly surprises-both Clark’s interest and knowledge. Was he overstating? Who would know, but it won’t surprise many people if, in the not too distant future, Newman is declared a “doctor” of the Church – someone whose writing has spiritual benefit for the entire body of the faithful.

Over the past few years, I have become more deeply aware and interested in Newman’s work. I have had the privilege of being exposed to a philosophy called “phenomenology.” It was developed in the early part of the 20th Century. Think Edith Stein (St. Benedicta of the Cross) and Karol Wojtyla (St. John Paul II). In my opinion, Newman was ahead of them, but in the field of theology.

That is, he shows an incredible sensitivity to the way God and human reality is revealed in and through human experience. In this, he is a sort of theological forerunner to the philosophy of phenomenology.

Newman is known for many intellectual works. The Idea of a University might help us in our current educational morass. The Apologia could be compared to Augustine’s Confessions. The Grammar of Assent may well help in this epoch of unbelief.

What has attracted me, however, are two other sets of writings: his sermons and his meditations on Christian doctrine. Before his conversion to Catholicism in 1845, Newman gave many sermons on virtually every Christian topic – whether it be Creed, Code or Cult. These sermons are all available. They are long and systematic, each focussing on one, abiding thought. They can serve today as helpful spiritual reading and just might inspire preachers, apologists, and communicators to focus their message. That would be welcome, don’t you think?

Newman’s meditations on Christian doctrine are shorter and more accessible. You can find them in book form or on the web. These are much shorter and succinct, but truly tender and evocative. As I have said, they show a remarkable sensitivity to human experience and the human condition – especially his own. So what we have here is an Englishman, in the 19th Century, with a prodigious and fierce intellect, bequeathing us a very affective and practical spirituality. It is amazing how aware he is about God’s interactions with him from a young age and how candid he is about his own human weakness. I kid you not, it is almost like reading a male version of St. Mother of Teresa of Calcutta’s spiritual diary.

His sermon on Christian Sympathy is fit for our time. He espouses the traditional Christian doctrine that God has been sympathetic by becoming human, but then he asks, why, given all that God has done for us, we Christians don’t seem to make better progress on our pilgrim way. Newman responds by suggesting that it is because we are not sympathetic to each other in the Christian community and the reason we are not sympathetic is because we think others won’t understand us with all our weaknesses. Newman thought this a fundamental error, which had an arresting effect on spiritual development.

This might be food for thought as we attempt to deepen our sense of community in our Archdiocese, parishes and movements.

A large contingent of young Canberrans were among over 200 young adults from different parts of Australia that made their way to Melbourne for the ... Read More

NEWER POSTTokyo archbishop: It is ‘difficult to find success’ on evangelization in Japan
OLDER POSTThe privilege of walking with people who mourn