Santa Claus and the Joker 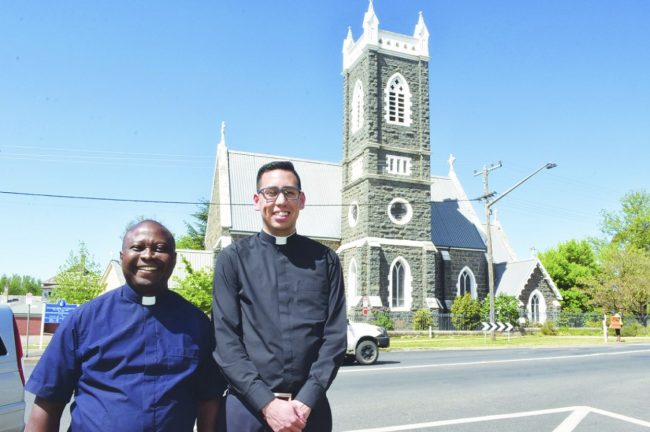 Looking for a good sense of humour in these COVID times?

Rumour has it that Frs George Ogah and Namora Anderson have it in spades.

The merry duo are the parish priest and assistant priest respectively at the Immaculate Conception parish, Tumut.

They bring a light-hearted touch to their banter which, according to Fr Namora, has a deeper meaning that comes with a label.

It’s called eutrapelia, roughly pronounced utre-pelia; a Greek word meaning ‘wittiness’. It’s about being a little playful in conversation in a nice way, nothing crude, rude, or crass.

Eutrapelia has a long ancestry having come down from the classical philosophers and the church’s great thinkers. Fr Namora said he was much influenced by the concept from his studies at the seminary.

“In the parish we try to live eutrapelic lives,” he said. “We enjoy life and part of that is good humour. So I’m always telling silly jokes. Nothing ridiculous.”

The jokes apparently get a good response from his presbytery housemate whose chortle, Fr Namora says, is “infectious and booming, like a big Santa Claus laugh.”

For his part, Fr George says he and Fr Namora have much in common.

They both love soccer and are big Chelsea fans. They share meals, jokes, and prayers together.

“There’s never a dull moment in the presbytery,” Fr George said. “In our house, our home here, it’s still fun.”

Fr Namora suggests good humour is integral to their Christian mission in the parish. “Once eutrapelia comes into play, we become joyful people,” he said.

With so much talk of viruses at present, it’s the one condition we all hope might be contagious

For so many years now the revelations of child sexual abuse within our church have left many catholics feeling humiliated and shamed. The breach of ... Read More