Scenes from the funeral of Pope Emeritus Benedict XVI Archbishop Georg Gänswein (right), the longtime personal secretary for Benedict XVI, kneels to kiss the book of the Gospels atop the coffin of the pope emeritus on Jan. 5, 2023, in St. Peter’s Square (photo: Daniel Ibañez/CNA / EWTN)

The first in many years

Pope emeritus’ death on Saturday brought an end to almost a decade of two Popes (former and present), living in the Vatican simultaneously. Benedict’s resignation in 2013 was the first in over 600 years, and his funeral on Thursday was the first in over 200 years in which a reigning Pontiff blessed the body of his predecessor before burial.

The crowd applauded as pallbearers carried Benedict’s cypress coffin out of the fog-shrouded St. Peter’s Basilica and rested it before the altar outside the square. Pope Francis then opened the service with a prayer and closed it by solemnly blessing the simple casket — decorated only with the former pope’s coat of arms.

Representatives from all over the world Heads of state and royalty, clergy from around the world and thousands of regular people attended the ceremony. Many mourners hailed from Benedict’s native Bavaria and donned a traditional dress, including boiled wool coats to guard against the morning chill.

Only Italy and Germany were invited to send official delegations, but other leaders took the Vatican up on its offer and came in their “private capacity.” These included several heads of state, at least four prime ministers and two delegations of royal representatives. In addition, a host of patriarchs joined 125 cardinals in the seats to the side of the altar, and the Russian Orthodox Church sent its foreign envoy. Among those attending was also Archbishop Georg Gaenswein, who bent down and kissed a book of the Gospels that was left open on the coffin before the ceremony began. 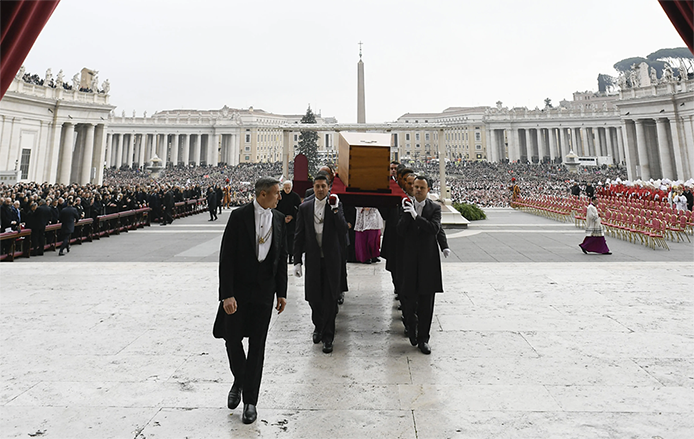 The coffin of Pope Benedict XVI is carried at his funeral Mass on Jan. 5, 2023, at the Vatican. Vatican Media

At the end of the funeral in St. Peter’s Square, some people shouted in Italian, “Santo Subito!” (Make him a saint now!), repeating the phrase exclaimed, by many people, at the funeral of Pope John Paul II in 2005.

Francis, who sat for most of the service because of a knee ailment, rose at the end as Benedict’s coffin was being carried away for a private burial inside St Peter’s Basilica. Bowing his head in silent prayer and briefly touched the casket.