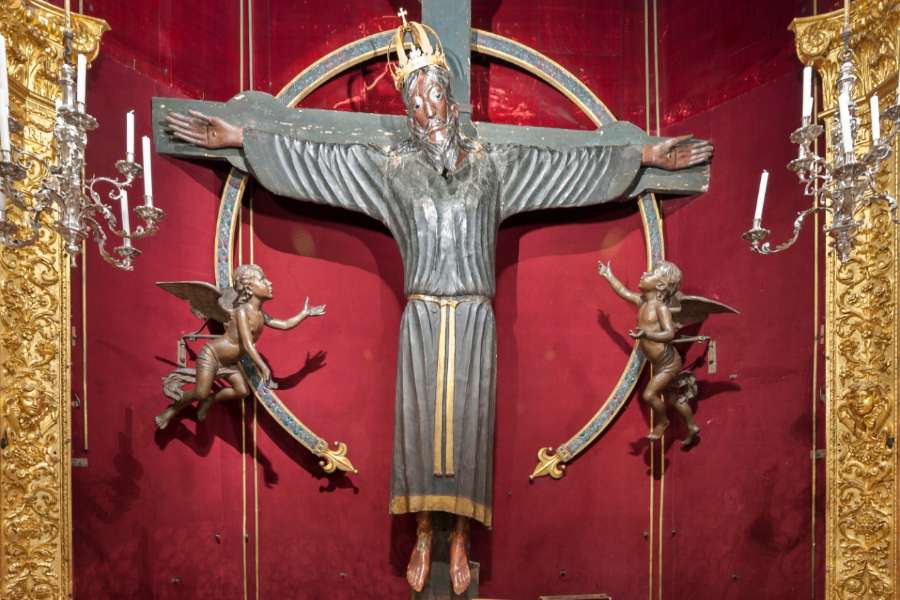 Rome Newsroom, Jun 26, 2020 / 08:30 am (CNA) – Scientists confirmed this month that a crucifix in the Italian city of Lucca is the oldest wooden statue in Europe.

A radiocarbon dating study conducted by the National Institute for Nuclear Physics in Florence dated the 8-foot wooden crucifix to between 770 to 880 AD.

The study was commissioned by the Cathedral of Lucca to coincide with the 950-year anniversary of the cathedral’s consecration, which took place in the late 12th century.

Devotion to the crucifix, known as the “Holy Face of Lucca,” spread throughout Europe in the Middle Ages, as pilgrims stopped in the walled Tuscan city on their way along the Via Francigena pilgrimage route from Canterbury to Rome.

Dante mentions the Holy Face of Lucca in his “Inferno,” and English King William II took a solemn vow in the name of the Holy Face in 1087.

The scientific study confirmed the local Catholic tradition based on a historical document stating that the crucifix arrived in Lucca in the late 8th century, according to the Archdiocese of Lucca. However, it does not lend evidence to the legend that it was carved from life by Nicodemus, a contemporary of Christ.

“For centuries much has been written of the Holy Face, but always in terms of faith and piety,”
Annamaria Giusti, scientific consultant for the Lucca Cathedral, said in a statement issued by the  Italian National Institute for Nuclear Physics.

“Only in the 20th century did a large critical debate begin around its dating and style. The prevailing opinion was that it was a work to be dated in the second half of the 12th century. Finally the assessment of this antique has closed this age-old controversial problem,” Giusti said.

“We can now consider [it] the oldest wooden statue in the West that has been passed down to us.”

In the carbon-14 study, three samples of the wood were taken from different parts of the crucifix and one of the linen fabric to be evaluated. Each piece dated to between the last decades of the eighth century and beginning of the ninth century.

Archbishop Paolo Giulietti of Lucca hailed the study’s results as a timely “message of salvation that comes from Jesus of Nazareth, crucified for love and risen in the power of God.”

“The Holy Face is not only one of the many crucifixes within our Italy and our Europe,” he said. “It is … a ‘living memory’ of the crucified and risen Christ.”

“It is a memorial that has its origins in antiquity, as today’s announcement confirms for us, and that has left indelible traces in the culture, spirituality of Lucca and the entire continent.”

Due to the coronavirus pandemic, the Cathedral of Lucca has postponed planned events celebrating its 950 year anniversary to the fall. It is unclear whether the city’s annual September 13 candlelight procession honoring the Holy Face will take place this year as many similar processions in Italy have been cancelled.

The at least 1,140-year-old crucifix can be viewed inside of the Lucca Cathedral of St. Martin.

This is Archbishop Mark Coleridge’s homily from the Catholic Bishops' Ad Limina Apostolorum Mass at the tomb of St Peter. Read More