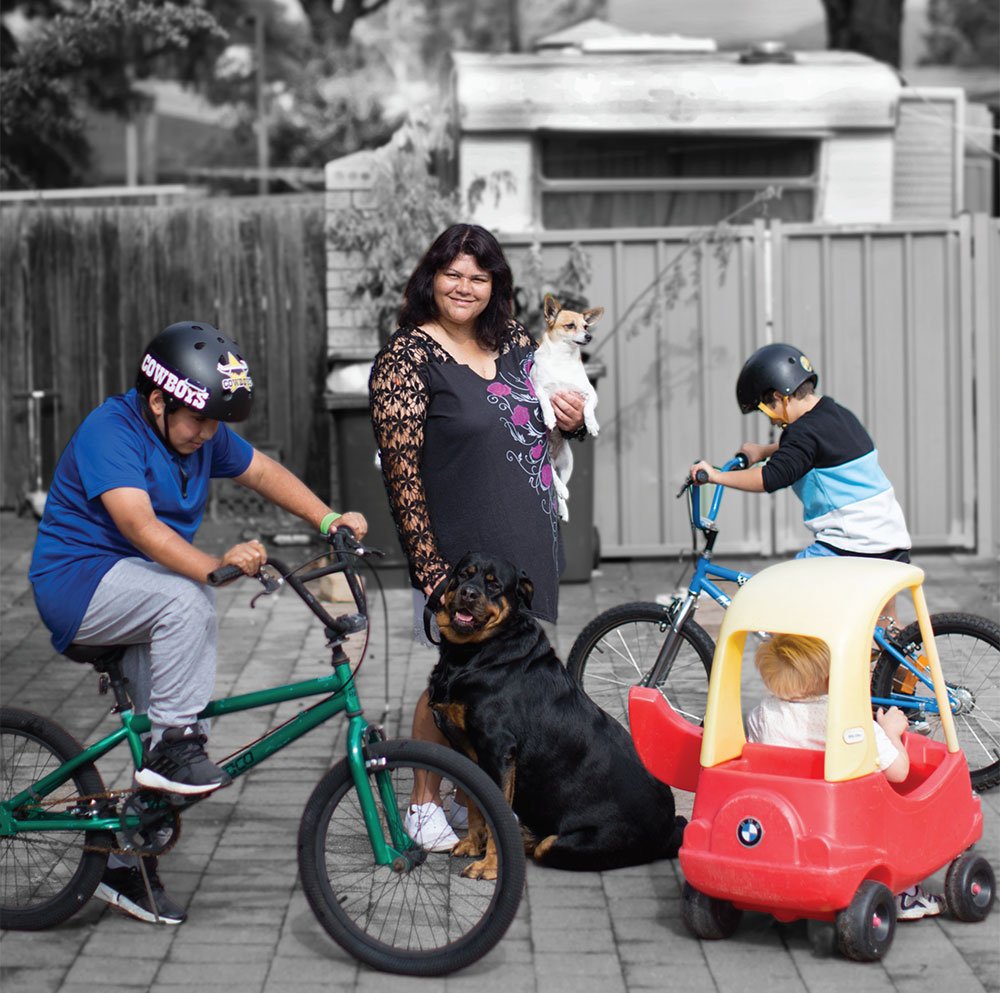 SHE MIGHT have been the ACT Barnardos Mother of the Year last year but nobody calls Selina Walker Mum.

“I’m just ‘Selina’ because I’m not their mother,” she says. “I’m more like a Godmother.”

None of that changes the fact she is a full-time parent to her 17-year-old God-daughter, the 11 and seven-year-old sons of her cousin (who died in 2015) and their three-year-old half-brother.

She also provides respite care for two other young boys from her family connections and offers support to other families in the Aboriginal and Torres Strait Islander community.

And let’s not forget the love and care she gives to the cockatiel, six budgies, four quails, two dogs and two cats that also share her little three-bedroom home in South Canberra.

In case that wasn’t enough, Ms Walker volunteers in various roles with St Anthony’s Parish Primary School in Wanniassa, including repaying the support the “awesome” school has given her foster children by assisting it with Indigenous issues.

When the weekend comes around, you’re likely to find her managing or coaching a rugby league or baseball team, “because I can’t just sit on the sidelines and chit-chat”.

Meanwhile, Ms Walker is following in the footsteps of her grandmother, Canberra Ngunnawal elder Agnes O’Shea, in conducting Welcome to Country ceremonies around the region.

It all adds up to a hefty workload for the 37-year-old, who took in the first of her foster children eight years ago. She is always on the run, has worked to establish routines and strong communication lines with her children, and has accepted the fact she “will always be late” (which she blames on the traffic lights that “just do not like me”).

She admits her life is “not all rainbows every day” but she has no regrets about the direction it has taken.

“I’m very spiritual and I go with my intuition, which has led me here,” Ms Walker says.

Having left school in year 9, she took a job with Big W for several years before a cousin, who was her “bestie”, died of an overdose.

That inspired her to get into drug and alcohol outreach work with the Gugan Gulwan Youth Aboriginal Corporation, and she still does some of that work.

When the fostering roles found her, she didn’t hesitate. “I never planned to be a carer but it’s just what you do in my community,” she says.

She was brought up in a nurturing “Abotalian” (her dad is Aboriginal and her mum is Italian) household, with “loving and caring parents whose door was always open” – and still is.

She applies that grounding to her own parenting, drawing on her strong maternal instincts and the fact “I am just a big kid myself”.

She describes herself as “proudly single – because I don’t need another kid to look after” – and is looking forward to seeing her foster children grow in her care.

“I tell them they’re stuck with me until they’re at least 18,” she says.

NEWER POSTNational ANZAC Day Mass
OLDER POSTTathra: down but not out