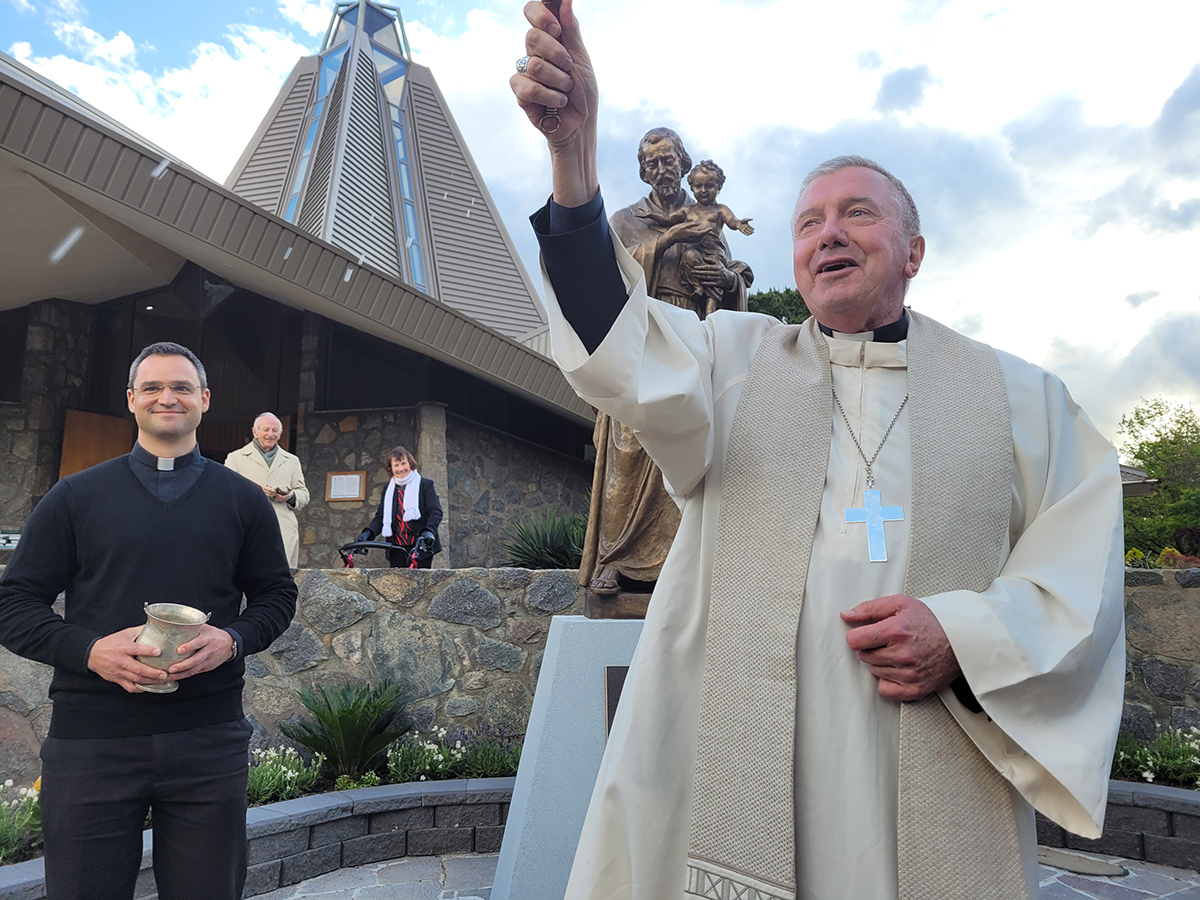 Celebrating the beginning of its golden jubilee year and the installation of a beautiful new statue, St Joseph’s parish at O’Connor was designed and built from the winnings of a lottery ticket almost 50 years ago. ABOVE: Fr Paul Nulley looks on as Archbishop Christopher Prowse blesses the new St Joseph statue and those attending the celebration.

A year from now, it will be fifty years since the church was first opened and consecrated on 28 October 1973.

It all started in a quirk of fortune when the proceeds from a winning ticket in the Sydney Opera House lottery of 1972 were used to design and construct this blue-stone church with its Irish Celtic influences – debt free.

Fr Nulley told the Catholic Voice that towards the end of Pope Francis’s Year of Saint Joseph (2020-2021), he had floated the idea of erecting a statue at St Joseph’s.

One thing led to another and through the generosity of bequeaths, a statue of St Joseph with the infant Jesus was conceived, constructed and shipped from Rome, where it now finds its home in the church’s forecourt in O’Connor.

In his ministry, Fr Nulley feels the presence of St Joseph very personally, “St Joseph is watching over me, interceding for me, and working with me,” he said.

Fr Nulley highlighted that many had come to St Joseph’s parish on pilgrimage.

“Hopefully this idea of it being a pilgrim centre continues,” he said. “St Joseph is now here at the front of the church to welcome all those pilgrims who come to honour him.”

During his homily that preceded the blessing, Archbishop Prowse referred to the Year of Walking Together which he had recently announced for the Archdiocese.

He suggested when it came to anniversaries, it was important not to look back sentimentally but to look forward to the future.
We should start asking the Holy Spirit; he said, “where do you want us to be so that we can all discern together.”

For the Archbishop, St Joseph was a great example of an evangelist.

“He literally walked together with Jesus, and before Jesus could even walk, he lifted Jesus as a little child. So my hope is that we will do the same…allowing Jesus to teach us how to walk spiritually.”

During the blessing of St Joseph’s statue outside the church, the Archbishop invited comments from those gathered on what the saint meant to them in their prayer life.

Several shared their thoughts, but one very young voice was determined to make a point amid the taller voices around him.

“When I pray to St Joseph,” he excitedly told the Archbishop, “he helps me obey my parents.”

The child’s comment along with other inputs reflected the parish community’s great devotion to their patron saint.

We have been informed that at the completion of the first phase of our Plenary Council journey the response from Australian Catholics has indeed been ... Read More